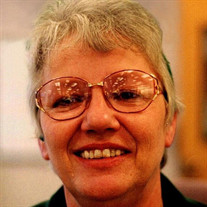 Sharron Heinrichs, 75, of Tacoma, Washington passed away June 13th, 2022. Surrounded by her husband, Bob, and her family, Sharron peacefully went to be with her Lord. Sharron was born September 21, 1946, to Ray and Caroline Olson of Miles City, Montana. She spent her youth there, as well as in Wolf Point and Glasgow, with her brothers and sisters. She married Bob on September 19, 1964, and afterwards, moved to Washington State, settling in Tacoma to start their family. Raising her children, Scott, Lisa and Lauri through their youth, Sharron decided to become a “working mom” and joined the workforce to help support the family. She got a job as a records specialist at Fort Lewis, Washington, spending 9 years there. She decided to change “companies,” trading the U.S. Army for Pierce County law enforcement and going to work for Law Enforcement Support Agency (LESA) Records in Tacoma. Sharron spent her time there as a warrant specialist, working with police officers and detectives researching warrants and criminal histories. She thoroughly enjoyed working there until her unfortunate forced retirement due to her medical condition. Sharron enjoyed working with her peers and the officers and took immense pride in helping them do what they needed to do to keep Tacoma and Pierce County safe. In retirement, Sharron enjoyed more time with her books and working on her crocheting. She and Bob were also able to do some travelling, going to Montana, Texas, and California to see some of the places they had always wanted to visit. They spent time relaxing in their RV out on Lake Mayfield, near Mossyrock, Washington. In her later years, Sharron spent more of her time at home, but that did not hamper her enthusiasm for watching stock car racing with Bob and dog Missy and cheering on her favorite drivers, Bill and Chase Elliott. In death, Sharron leaves behind her husband, Bob; children Scott and Linda Heinrichs, Lisa and Rocky Chipman, and Lauri and Ernie Nerseth and the many grandchildren and great-grandchildren whom she loved and enjoyed very much.

Sharron Heinrichs, 75, of Tacoma, Washington passed away June 13th, 2022. Surrounded by her husband, Bob, and her family, Sharron peacefully went to be with her Lord. Sharron was born September 21, 1946, to Ray and Caroline Olson of Miles City,... View Obituary & Service Information

The family of Sharron Heinrichs created this Life Tributes page to make it easy to share your memories.