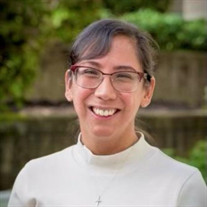 Melissa Christine Hernandez was born at Ft. Hood Texas on December 17th, 1976, had passed into eternal heavenly rest on April 26th, 2022 in Renton Washington. Leaving behind her mother Dora Schneider, Father Richard Schneider, Father Joseph Hernandez, brother Michael Hernandez with wife Jennifer, with children Mariah, Jordan, David, and Elena. Brother Erich Schneider with wife Alicia, with children Ben and Sam. Sister, Megan (Hernandez) Ingram, with husband Richard, with children Madeline, Ryan, and Celestina. Sister Jennifer (Schneider) Walker, with husband Brett, with children Hadley and Hannah. Melissa started out in life traveling the world with her military family living in Texas, Louisiana, Germany, and North Carolina before settling in the Western Washington State at the age of 11 years old. Melissa was always a very compassionate, giving person. Her highly infectious giggle that always stayed constant since the day she was born will be greatly missed especially by her family and friends. Her creative imagination, was endless as she grew up, molding her to the most fun-loving Auntie, Godmother, a loyal friend and mother to her fur babies Ziggy, (who is definitely with her now), and the latest family addition, her dog Beaux. Before Melissa left this earth, becoming a Nurse was her constant dream as long as any of her family members could remember. After graduating Franklin Pierce High School (Tacoma, Washington) she continued her higher education and obtaining her master’s degree. Nobody would have known how stressful that time was for her, as she preserved not saying anything and being so very positive during it all. With all, she still wanted more. She was actively enrolled in an accredited doctorate program at Boise State University School of Nursing. She earned everything she did for herself and was very proud of that. She made it so far with her schooling and was blessed to be a teacher of something she always wanted to do and be. Her family feels so blessed to have had her in their lives for 45 years, and Melissa’s views on positivity would warrant anyone who knew her to believe in that. She didn’t take her life for granted, and she made sure she left that legacy professionally and spiritually with her closest friends and family. Melissa, we love you so very much and we will miss you greatly. Thank you for being who you were, and we are so very proud of all that you have accomplished before leaving this earth. We know you would want us to focus on the good only, and if we didn’t hear that from you, we would be taking your unexpected passing a lot harder. We love you so very much Sweet and Beautiful Melissa Christine, and we know we will see you again in Jesus Name. Matthew 25:23: His Lord said to him, "Well done, good and faithful servant: you have been faithful over a few things, I will make you ruler over many things. Enter into the joy of your lord." In loving memory, her legacy will continue by donating at: https://www.lwtech.edu/about/foundation/give/

The family of Melissa Christine Hernandez created this Life Tributes page to make it easy to share your memories.

Send flowers to the Hernandez family.