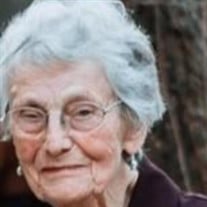 Please see the webcast of Mary's service here: http://webcast.funeralvue.com/events/viewer/57507/hash:D49B2EB99C21FC36 Mary Annabelle Peterson was born on October 24, 1935 to William and Emmy Heffernan, joining her sister Nancy. They went on to have seven more children, siblings who Mary loved and enjoyed her relationships with. She married Louis Peterson in 1954 and by 1961, they had a family of 4 boys: Robert, William, John, and Louie. They thought their family was complete until 1977, when they a daughter Michelle. In 1985, her husband Louis passed away, and she began a new season of raising Michelle on her own. She became a preschool teacher for a number of years. She loved the little kids that she taught. She then became an in-home caregiver and became close with a number of people she cared for over the years. She worked doing this for 20+ years, working part time until she was about 80 years old. She also sold Avon for many years, and her favorite part of that was the many neighbors she got to know better through that. Mary loved being a mom and a grandma. She always tried to be as involved as possible in all of her grandchildren’s lives. She loved attending there sporting events, concerts, plays, and anything else she could. All of her children and grandchildren appreciated all of her love and time she has given them through the years. Most important to her were all of the prayers she said for them all over so many years. Her loving prayers for so many members of her family; her siblings, her children, her nieces and nephews, her grandchildren, and so many more; have meant so much to them over the years. The only thing Mary loved more than her family was Jesus and her faith was such a sustain and important part of her life. Her church and her church families have always a great support for her. She attended South Tacoma Assembly of God, Spanaway Assembly of God, and spent the last 25+ years attending Church for All Nations(Bethel Christian Assembly).She taught children at all 3 of those churches, mainly preschooler who she adored. She always told people it was amazing how much they could learn about Jesus and how important preschool classes were in church. She was preceded in death by her parents Bill and Emmy, her husband Louis, son John, sister Nancy, brothers David and Dale, and many other family members. We are comforted by the belief that they are together again. She is survived by her sons Robert(Elizabeth), William(Carla), and Lou; her daughter Michelle(Chris); and daughter-in-law Marie. She had fourteen wonderful grandchildren who she adored: Ryan(Heidi), Sarah(Stephen), Jeff, Tim, Jakob, Ella, Levi, Hannah, Henry, Helen, Harrison, Hope, Kalin(Jae), and Logan. She also had five great-grandchildren, Baxter, Liliana, Lyla, Emilia, and Frederica. She is also survived by her sisters Ruth and Doris, brothers Paul(Bonnie), Chuck(Phuong), and Dennis(Zana), sister-in-law Kathie, her many nieces and nephews, great-nieces and great-nephews, and other extended family. She had many friends who she cared deeply for and who cared so much for her. Her loss will be felt deeply by so many, and yet we rejoice in the belief that we will see her again someday. A celebration of Mary’s life will be 11AM Wednesday July 28that Mountain View Funeral Home, followed by a graveside and small reception.

The family of Mary A. Peterson created this Life Tributes page to make it easy to share your memories.

Send flowers to the Peterson family.