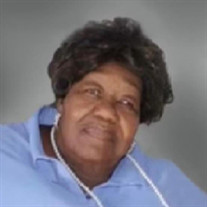 Lizzie Mae Ramsey was born in Boyle, Mississippi, on June 16, 1928, to Albert and Pauline Jarret. She was the baby sister to Leanna, Leona, and Willy, and the older sister of Henry T. In her youth, Lizzie was known for her candor, modesty, willingness to do what is right, and the ability to bring peace to a storm. She was kind and hardworking, and her righteousness and relationship with the Lord were unshakeable, even from a young age. It was her faith that gave way to the mighty light and strength that would create the seismic impact felt by the hundreds of lives she would touch. As a child, she worked on her father's expansive farm, which grew everything from tomatoes (her favorite) to potatoes, watermelon, and onion. "You name it, he grew it," she would say. Growing up, her parents instilled the importance of being a Good Samaritan and working hard for the sake of those around her. Lizzie married Louis Clyde Ramsey, Sr., and began her family, welcoming Louis Clyde, Jr. in November 1946. Their family expanded, adding her children, Willie Earl, Ernest Lee, Clarence, Charles, Robert, Joyce, Emma, Verna, Gary, and Brenda. In 1970, looking for more opportunity, and at the constant request of eldest son Louis, she moved her children from Mississippi to Washington State. This transition was not for the weak, and her strong-willed nature and constant faith in God's ability to provide gave her the warrior spirit of the woman we celebrate today. Her name grew and took on new meaning as the profound love she gave to her community would guide her into the roles of protector, counselor, provider, leader, and mother. She found her spiritual home in Edward’s Temple, where she served as a revered Church Mother. Working with the church’s First Lady Gertha Edwards, the two established the robust Hilltop Feeding program that supported thousands of community members with need, for the near two decades of its operation. Affectionately known by her children as Madear, Lizzie found herself the mother of The Block, the neighborhood where she deeply planted her roots, and where she served as the lifeblood of support and guidance to many. For her children, Lizzie gave her all. Taking every opportunity, the Lord would provide her, she worked herself “to the bone,” ensuring that her children were well-taken care of and secure. Though they were not wealthy in currency, the riches she afforded her children were immeasurable and without limit. Her love and gentle hand outweighed the firm grip she would use to keep her brood in line and extended the same affection to her grandchildren. In the rare moments of rest, she could be seen with a coy smile and a bright eye as she recounted stories from her childhood, where she was fallible and human. Like the time she sneaked a sip of whiskey that laid her flat-out on the floor or the time her father repeatedly scolded her and her siblings for sneaking watermelon in the family patch. For entertainment, she enjoyed watching her westerns, Food Network, and Little House (Little House on the Prairie). To her grandchildren, she was stern and playful, gentle and mischievous. They ran her just as crazy as her children, but her patience had grown, and her strong hand softened. Her embrace was safe and warm, and her love and expression resounding.

Lizzie Mae Ramsey was born in Boyle, Mississippi, on June 16, 1928, to Albert and Pauline Jarret. She was the baby sister to Leanna, Leona, and Willy, and the older sister of Henry T. In her youth, Lizzie was known for her candor, modesty,... View Obituary & Service Information

The family of Lizzie Mae Ramsey created this Life Tributes page to make it easy to share your memories.

Lizzie Mae Ramsey was born in Boyle, Mississippi, on June 16,...

Send flowers to the Ramsey family.