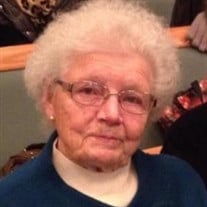 Laverne Wiemer was born on January 18, 1926 in Meridian, Idaho to Edwin and Delila Skinner. Laverne grew up in Boise, Idaho where she found her love for the violin. Laverne spent many years in Tacoma, WA, Beaverton, OR and Puyallup, WA after marrying Carl Wiemer on October 25, 1944. Laverne’s last residence was at Brookdale Courtyard in Puyallup, WA where she received kind and compassionate care from the staff members. Laverne went to be with our heavenly father on November 21, 2021. Laverne was a dear friend to many who kept in touch with her through cards and letters throughout the years. Many of the cards and letters were cherished keepsakes that remained with her until her last day. She was also an avid genealogist, spending many hours finding and collecting family history. Community involvement was important to Laverne and she participated in school PTA, scouting and other various services. She attended Puyallup Church of the Nazarene for many years and was an enthusiastic member of Red Hats Society and TOPS. A kind, loving, devoted mother, wife and friend. She loved her family and friends endlessly and so many loved her in return. Laverne enjoyed cooking, camping and going for long drives to see different cities and states out the car window. Laverne also loved mashed potatoes and gravy, homemade macaroni and cheese and Milky Way candy bars. With a twinkle in her eye, Laverne had a wicked sense of humor. Announcing to the family when she turned 80 that she was going to get a tattoo and never cook again. The family is not sure about the tattoo, but she indeed stopped cooking. She was preceded in death by her husband of 61 years, Carl Wiemer and many cherished family and friends. She is survived by her loving son Mark (Margie) Wiemer and grandchildren Jonathan and Jennifer. Daughter Sharon (Roger) Jose and grandchildren Joshua, Michelle and Aimie. It gives us great comfort knowing that Laverne is now with our heavenly father and was met joyously by so many friends and family. Private graveside services will be held on Friday December 3, 2021 at Mountain View Cemetery, Tacoma, WA. A public memorial service is being planned for a later date at the Puyallup Church of the Nazarene. In lieu of flowers, the family respectfully askes that you make a contribution to a local charity of your choice in Laverne’s honor.

Laverne Wiemer was born on January 18, 1926 in Meridian, Idaho to Edwin and Delila Skinner. Laverne grew up in Boise, Idaho where she found her love for the violin. Laverne spent many years in Tacoma, WA, Beaverton, OR and Puyallup, WA after... View Obituary & Service Information

The family of Laverne Wiemer created this Life Tributes page to make it easy to share your memories.

Send flowers to the Wiemer family.