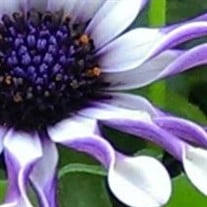 Esther Ione (LaBrant) Waldrip, 91, died on August 17, 2021, at St Clare’s Hospital in Lakewood, Washington. Her two children, Sara (Sunny) and Peter were with her as she peacefully passed. Esther lived in Coupeville from September 1959 to Fall 2018 when she moved to Steilacoom to be with her daughter, Sunny Burns. She was preceded in death by her husband, James (Jim) Sherman Waldrip, Jr. of 68 years. She leaves behind her daughter Sara L. Burns and son Peter R. Waldrip; daughter-in-law Susan M. Waldrip; and eight grandchildren: Daniel Burns, Cory Burns (wife Giovanna), Rose Harris, Caitlin Burns, Stacey Houk (husband John), Jonathon Waldrip (wife Bailee), Matthew Waldrip (wife Grace) and Martin Waldrip. She also had five great-grandchildren: Mason Burns-Martinez, Kennedy Harris, Kevin and June Burns and Margaret Hope Waldrip. Esther was born in Belden, North Dakota, to Arthur Duane LaBrant and Anna Marie (Hansen) LaBrant. She was their sixth child, born and raised on the family wheat farm located three miles southwest of Belden. She attended the Platt grade school and worked her way through high school. She graduated from Stanley High School in 1947 and attended Humboldt State College in Arcata, California. After high school graduation, Esther joined her older sister, Marie, in Rochester, Washington and went on to work with the State House of Representatives and Insurance Commissioner’s Office in Olympia, Washington, then enrolled at Humboldt State College. She married Jim Waldrip on Sept. 23, 1949, and moved to Hawaii where Sara was born in 1951. Peter was born in California in 1953. They led an interesting life connected with the Navy, living in California, Tennessee, Florida, Connecticut and settling in Washington on Whidbey Island. Esther worked at Coupeville High School through a Title III grant and as a Teacher’s Aide for ten years. She was active in Girl Scouts (Troop Leader, Camp Counselor, and Neighborhood Chairman), Boy Scouts (Den Mother), DeMolay Mother’s Club, and PTA. She served as the secretary for the Island County Historical Society for seven years in the 1970’s. She and Jim also enjoyed boating and harvesting her large garden and fruit trees each year. For over twenty years Esther and Jim traveled to Arizona for the winter months, boating in the summer months and entertaining grandchildren. She spent her last two and a half years after Jim died living with Sara, and Sara’s daughter Rose Harris and granddaughter Kennedy Harris in Steilacoom, Washington where they shared many laughs, fancy tea parties and family gatherings. She also stayed with Pete and Sue in Joyce, visiting the grandchildren, reading, watching birds, and enjoying being in the forest setting, reminding her of the good times when she and Jim lived on the Whidbey “farm.” She was a financial wizard, a gifted seamstress, did stitchery, stained glass, loved doing crossword puzzles and was a voracious reader. She was the glue that held our family together and her presence in our lives will be missed beyond measure. Services will be at the Masonic Lodge at 521 North St SE, Tumwater, WA on September 26 from 11:00 am to 2:30 pm.

Esther Ione (LaBrant) Waldrip, 91, died on August 17, 2021, at St Clare&#8217;s Hospital in Lakewood, Washington. Her two children, Sara (Sunny) and Peter were with her as she peacefully passed. Esther lived in Coupeville from September 1959... View Obituary & Service Information

The family of Esther Ione Waldrip created this Life Tributes page to make it easy to share your memories.

Send flowers to the Waldrip family.