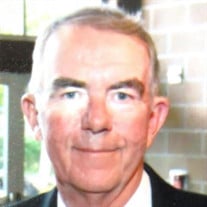 David Alan Michaud, a former Tacoma General Hospital Administrator and retired business executive passed away at Saint Anthony Hospital in Gig Harbor, WA on February 8. He was attended by immediate family. David was born December 7, 1942, in Burlington VT, the second of four children in the family of Clayton Napoleon Michaud, and his wife, the former Marion Emery Gage. He arrived in Washington in 1950, grew up in the Lakewood area, graduated from Clover Park High School and joined the National Guard. David began college at Menlo College in Atherton CA, went on to graduate from Washington State University in 1970 and then traveled east to graduate school at the University of Minnesota in Minneapolis where he was awarded a Masters Degree in Hospital Administration. David's professional life began in the healthcare industry at Tacoma General Hospital; where he was able to develop needed hospital programs, services and facilities that significantly benefited patients in the greater Tacoma area. He later transitioned his working focus to private business ownership, where he also enjoyed a successful career. David believed in and lived his own American Dream and liked to remember he had grown up in humble beginnings, worked extremely hard, gathered knowledge at every opportunity, focused his efforts; and as a result had been able to see, experience and possess everything he wanted in this life. He was a voracious reader and had a curious, intellectual mind. He was very social and a fun and willing life traveler. Dave was an avid golfer and fly fishing enthusiast in his retirement. He enjoyed a 40 year group of golfing friends in the men's clubs of first Tacoma Golf and Country Club, then Canterwood Golf and Country Club. He was a gifted athlete and outdoorsman throughout his life and enjoyed participating in or viewing any sporting competition. David is survived by his wife, Christine; sons Garrett (Jennifer) of Seattle, WA and Jared, daughter Jamie and stepson Justin Anderson (Robyn), two grandchildren, sisters Jeanne Mikita and Susan Dahl of Cortlandt Manor, NY and brother Stephen Michaud of Baltimore, MD. He is also survived by 15 nieces and nephews. David's final arrangements include a few ashes on his best loved golf course and interment at Mountain View Cemetery, Lakewood, WA with other family members. A Celebration of Life and Memorial Service will be on Sunday May 15th at 2 PM at Fircrest Golf and Country Club. A further time for refreshments and sharing will take place following the service. Remembrances can be made to Washington State University Foundation, Crimson Opportunity Scholarship Fund in memory of David Michaud.

The family of David Alan Michaud created this Life Tributes page to make it easy to share your memories.

Send flowers to the Michaud family.