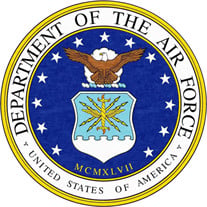 Bill Was born in Seattle on 3 Jan 1926 the son of William & Gunella Schwehm. He attended Columbia Grade and Franklin High Schools. He was a member of the Class of 1944 and a member of the Base Ball Team. Following graduation Bill entered the Air Force Pilot Training Program. As WW2 was winding down the Pilot Training Program was terminated. Bill remained in the Air Force and was sent to the Philippines for a year. He attained the rank of Sgt before receiving an Honorable Discharge. In 1948 he applied for the new Air Force Pilot Training Program and began his new life as an Air Force Pilot. H flew 250 Missions during the War in Korea and following the War continued to fly World wide and when not in the air he attended various Service Schools. While attending a school in North Carolina he was introduced to a local High School first year teacher and daughter of a Preacher. Following his return to his Home base a love affair by mail began. In June Bill drove to North Carolina where he and Miss Paula Ann Pegg's father performed their Wedding ceremony in his Church. The Air Force had a special Wedding Gift for the newlyweds, that being a 3 year tour in Japan where their two daughters Carol and Susan were born. After three years of flying to almost every country and island in the Pacific and eastern Europe the family said goodbye to Japan and friends and left for Bill's new assignment. The move was to a new home in Albany Georgia where Bill was appointed to form a new Squadron of RC-130 aircraft, this new Squadron's mission would be photographing from high altitude. The first task was to qualify all of the aircrew members in the new aircraft and the new survey equipment located at their crew station. After two years and all aircrews qualified and scattered throughout the World, Bill asked to be transferred back to McChord AFB. His request was granted and the move was completed in the Summer of 1960. Bill was back flying the C-124 and again flying all over the world. During the next few years' Bill spent two 6 month tours in Alaska providing airlift for the Alaskan Command. Time passed and the Air Force had a new aircraft that would replace the worn out C-124 and McChord would replace their C-124 with this C-141 Jets. At the time Bill was the Chief of Air Crew Standardization so he was instrumental in the training and qualifying of the pilots who would fly the C-141s.At the time Bill had advanced to the rank of Lt col .and as such, he was selected to attend the prestigious Air War College, a one year senior officers school. Following his Graduation from the War College he volunteered for an assignment to a new Air Force unit, an AC-130 gunship Squadron•• After forming and training the crew members Bill and the crew personnel were air lifted to Ubon Thailand. This was the 16th SOS home for each crew members one year tour. The Squadrons duty was to fly nights over the trails that ran from North Vet Nam to South Vet Nam and destroy the trucks that used these roads and trails to supply the north's troops. BiH flew over 200 of these night missions during his one year tour. for his missions and leadership he won a box full of medals and awards, 3 of the medals were for heroism in flight. Upon completing g his one year tour, Bill returned to McChord. He was promoted to Colonel and was made the Chief of Aircraft Maintenance. Shortly thereafter, Bill Was transferred to Scott AFB, He spent 3 months at Scott and retired having served 22years. Bill then joined two friends in a Real Estate .and General Contracting business. After about two years he retired to the Golf Course where he was joined by several of his Air Force friends. Bill had a long and interesting life

Bill Was born in Seattle on 3 Jan 1926 the son of William & Gunella Schwehm. He attended Columbia Grade and Franklin High Schools. He was a member of the Class of 1944 and a member of the Base Ball Team. Following graduation Bill entered the... View Obituary & Service Information

The family of William J. Schwehm created this Life Tributes page to make it easy to share your memories.

Send flowers to the Schwehm family.