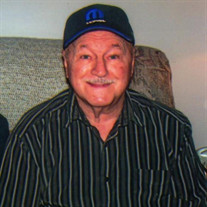 William Anthony Sacha passed away on February 15, 2022, at home in Tacoma, Washington, at the age of 89. He was born on May 14, 1932, in New York, New York, his father, Alois, was 29 and his mother, Mary, was 27. He married Adeline Jessie Gronenthal and they had three children together. Laura, Susan, William Kr. They later adopted a son Walter. He then married Aline Faye Ketter on April 2, 1971, in Reno, Nevada. He was preceded in death by his parents, his older brother Louis John, and a sister Ludmila (aka Amelia). He is survived by his wife Aline, two daughters Laura Barrett (Duane) of Bremerton, WA., Susan Gilland (Jerry) of Othello, WA., his two sons William Sacha Jr. (Vickie) of Walla Walla, WA. and Walter Sacha (Teri) of Keizer, Oregon., a step-son Terry Delikat (Kayring) of Chehalis, WA., 10 grandchildren and numerous great-grandchildren. He is also survived by two sisters Marion Fazio (William) and LaRue. Mountain View Funeral Home of Tacoma, WA.is handling arrangements. Per his last wishes there was to be no services and he was to be cremated. Graveside service to be determined later.

The family of William Anthony Sacha created this Life Tributes page to make it easy to share your memories.

Send flowers to the Sacha family.