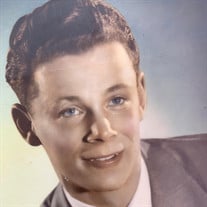 Bill was born in Rugby, North Dakota on December 12, 1931. He passed away July 23rd, 2021, surrounded by his family. He was 89 years old. He is survived by his son Larry Offner, daughter Karen (Marc) Harris, son Todd (Darla) Offner, daughter Katherine (Mitchell) Staskewicz, grandchildren Matt Harris, Melissa (Jordan) Harris-Grier, Brandon (Stephanie) Offner, Christen Offner-Williams, Charlotte & Holden Staskewicz, great-grandchildren Kaydin & Kenzie Harris-Grier, Pierce & Savannah Offner and Jadeine. Ava & Landon Williams. Bill was preceded in death by his beloved sons, Greg and Ken Offner; parents, William and Anna Offner. Bill moved from North Dakota to Tacoma, WA as a young boy. He graduated from Lincoln High School in 1950. Bill enlisted in the US Air Force and was proud to serve in the Korean War. His service time was cut short as he was summoned home due to a family hardship. Bill married and started a family of four children while building his first home in Puyallup, WA. He later moved to Gig Harbor, WA where he added two more children to his family. In the following years, he remained busy; working full time, raising his children, and building two more homes. Bill remained in Gig Harbor for most of his life. His beloved daughter Karen was his caregiver for the last several years in Bonney Lake. Bill spent his entire career working in Industrial Sales for St. Regis Industrial Supply which turned into Morse Industrial Supply based in Tacoma, WA. He was well known and respected in the Tide Flats of Tacoma. He made countless friendships along the way and was very proud of his career choice. Bill loved boats and was happiest while fishing for salmon. He was proud that he built his first fishing boat. We are all filled with wonderful memories of our yearly trips to Sekiu, WA and fishing at Point Defiance in Puget Sound. Bill had a passion for his children and grandchildren, often sacrificing for the betterment of his family. Bill will be deeply missed and remembered for his kindness and loving heart. “Dad – You’ve got a bite. Fish on!”

Bill was born in Rugby, North Dakota on December 12, 1931. He passed away July 23rd, 2021, surrounded by his family. He was 89 years old. He is survived by his son Larry Offner, daughter Karen (Marc) Harris, son Todd (Darla) Offner, daughter... View Obituary & Service Information

The family of William Arthur Offner created this Life Tributes page to make it easy to share your memories.

Send flowers to the Offner family.