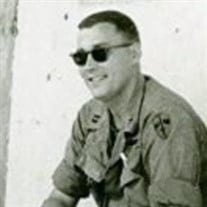 William R. Harman, US Army LTC (RET), entered this world in Carrizozo, New, Mexico on November 6, 1942 and left on December 10, 2021 in Tacoma, Washington. He was Bill, Dad, Grandpa, and Papa. Raised by his parents, Roy and Carolyn Harman, in a central New Mexico small town in an area most famous for Billy the Kid, Bill had a great childhood. After high school, he first attended New Mexico Institute of Mining and Technology and then New Mexico State University where he participated in ROTC, earned a Bachelor’s Degree and most importantly, met and married his wife of 54 years, Barbara; who he couldn’t take his eyes off until the end. He was awarded his Masters of Arts in Public Administration degree while stationed in Germany. After completing his undergrad degree and ROTC program, Bill went on active duty and served his country as a regular US Army officer for 20 years, retiring in 1986 with the rank of Lieutenant Colonel. He completed a tour in Viet Nam from 1969 to 1970, earning several medals including a Bronze Star and Combat Infantryman Badge. Bill was especially proud of receiving the Combat Infantryman Badge since he was Air Defense and not Infantry. He served tours in: Würzburg, Germany; Fort Bliss, Texas (twice); Amman, Jordan; Fort Bragg, North Carolina, and; Fort Lewis, Washington. His military career took him from Air Defense to military psychological operations to Special Operations (Green Berets) to developing new military technology to a general’s staff officer with I Corps. Throughout his career, he served with the greatest of devotion to country. After his military career, Bill worked as a computer programmer/coder, a passion he developed in college. In post Army life personal interests, Bill devoted hours to researching family genealogy, watching native birds in his backyard, learning about coffee beans from around the world and roasting his own coffee eventually developing a formula that was much-loved by family and friends. He truly loved exploring the Harman family tree, sharing it with others and helping anyone explore their family history. Bill also spent time serving his community as a volunteer parking enforcement officer for the Lakewood Police Department. Bill raised three children, Shaun (Olympia), Stacia (Lakewood) and David (Vaughn), was grandfather to six grandchildren, Erica (husband Tristen), Trevor, Aidan, Nicole, Jace, Jasmin and was excited to soon become a great-grandfather. He loved his children and grandchildren from the beginning and showed his love to all in his way. Bill (Dad, Papa, Grandpa) passed on a love for puns, bad jokes in general, condiments (he rarely met a condiment he didn’t like and keep and he kept a few he didn’t like just in case he might), Star Trek, and duty to family and country. He worked all his life to provide for his family and gave them experiences of a lifetime with living in other countries, differing areas of the US and providing opportunities to grow. He left us suddenly and unexpectedly but we’ll still see Bill, Dad, Grandpa in our hearts and in the faces and behaviors of his children and grandchildren. He was supportive, loving, kind, gentle and will be missed but never forgotten. Bill could tell the difference between a black-capped Chickadee and a Cedar Waxwing but not sure if he could tell the difference between a gardenia and geranium. The family asks that in lieu of flowers or other tributes that a donation is made to the Disabled American Veterans (DAV), similar organizations or a charity of choice. Bill will be interred at the Tahoma National Cemetery among other veterans, as he wished.

William R. Harman, US Army LTC (RET), entered this world in Carrizozo, New, Mexico on November 6, 1942 and left on December 10, 2021 in Tacoma, Washington. He was Bill, Dad, Grandpa, and Papa. Raised by his parents, Roy and Carolyn Harman,... View Obituary & Service Information

The family of William Roy Harman created this Life Tributes page to make it easy to share your memories.

Send flowers to the Harman family.