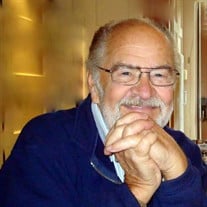 Wayne Eldon Graham (Wayno) 88, died peacefully on Wednesday May 11 2022, in Tacoma Washington after a well-lived life. Though Wayne joked that his longevity was fueled by hamburgers and popcorn balls, his endless creative pursuits and love for his family were his life force. Born December 1 1933, Wayne was raised in Port Orchard, Washington where he grew friendships that lasted his lifetime. After graduating from High School, Wayne moved to Tacoma where he worked as a computer programmer for 35+ years and raised his three children with his first wife, JoAnn. In 1985 Wayne was reconnected with Carol Jones, a former coworker from his early days at Ward Smith/Coast Mortgage. In 1986, they were married and enjoyed 35 happy years together. Their marriage was full of many laughs, smiles, fun and dinners at Harbor Lights Restaurant where he proposed. Throughout his life, Wayne could be found in his basement garage rebuilding cars, woodworking or tinkering. His creations included countless refurbished convertibles, popcorn wagons, whirly-gigs, wooden toys for his grandchildren, practical items, and personalized bobbleheads featuring photos of loved ones and friends. He also continued his father's business of making and selling Graham fishing reels. Wayne is remembered by his family and friends as someone quick to make you laugh or smile. He often created personalized cartoon series as birthday cards and for decades emailed daily jokes, poems or life updates to his friends and family. Wayne is preceded in death by his son Mike and his brothers James, Don and Larry. Those who will miss Wayne most include his beloved wife Carol, children Richard (Katherine), Lori (Chris) and Carrie (Jarrod) along with his nine grandchildren and two great-grandchildren and his precious dog, Sweet Pea. Carol would like to thank all their family and friends for their support. A special thanks goes to their kind neighbors, Kevin and Melinda Ryan for all they have done for them in the past and present years and for Wayne's "smash burgers" every Friday night which sure brought a big smile to his face. Family and friends are invited to remember Wayne on June 6th at 5:00pm. We will gather at his favorite pizza place, The Cloverleaf - 6430 6th Avenue, Tacoma, Wa.

Wayne Eldon Graham (Wayno) 88, died peacefully on Wednesday May 11 2022, in Tacoma Washington after a well-lived life. Though Wayne joked that his longevity was fueled by hamburgers and popcorn balls, his endless creative pursuits and love for... View Obituary & Service Information

The family of Wayne Graham created this Life Tributes page to make it easy to share your memories.

Send flowers to the Graham family.