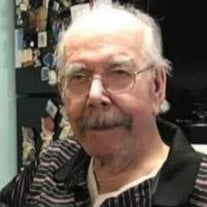 Walter L. Colburn, passed away peacefully in his sleep on October 28, 2021. Walter was born on August 10, 1927 in Tacoma to William and Daisy Colburn, one of six children. After high school he joined the army, and a few years afterwards he met and married Shirley Kendall. Together, they had 6 children: Barbra, Ken, Diana, Linda, Dan, and Michael. Walter worked for a time at Coca Cola and then changed jobs and worked and eventually retired from West Coast Fruit & Produce as a truck driver and was a proud member of Teamsters 313. Walter enjoyed taking his family on weekend camping trips around Washington state and a longer 2 week trip every summer, traveling to California, Canada and beyond. He instilled the love of camping and travel in many of his children. Walter enjoyed projects where he could work with his hands like woodworking. There was one friend that he did many projects for and she would often say, “That Walt, he can do anything!” In his later years he enjoyed working his mind with word search puzzles. After the passing of his first wife in 1999, Walt was blessed to meet, date, and later marry the second love of his lifetime, Dorothy Valentine. They continued their love of travel and adventure together for several years, including a memorable cruise up to Alaska, which they both thoroughly enjoyed. Walt is survived by his wife, Dorothy; two sons, Ken and wife, Tammy Colburn, and Dan and wife, Susan Colburn; three daughters, Barbra Colburn, Diana Colburn, and Linda and husband, Mike Koffler; step-son, Jerry Bradshaw; two step-daughters Sherry Merman, and Neola and husband, David Larabee; 7 grandkids; 12 step-grandkids; and many more beloved great and great great grandkids. He was preceded in death by first wife, Shirley; son, Michael Colburn; brother, William Colburn. We will miss you dad, husband, uncle, and friend. You’ll remain in our hearts forever.

Walter L. Colburn, passed away peacefully in his sleep on October 28, 2021. Walter was born on August 10, 1927 in Tacoma to William and Daisy Colburn, one of six children. After high school he joined the army, and a few years afterwards he... View Obituary & Service Information

The family of Walt Colburn created this Life Tributes page to make it easy to share your memories.

Walter L. Colburn, passed away peacefully in his sleep on October...

Send flowers to the Colburn family.