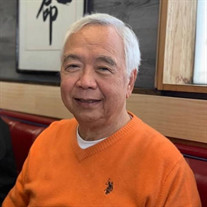 Virgilio “Gil” Carmen Villagracia On Saturday August 14 2021, Virgilio passed away unexpectedly in Lakewood, Washington at the age of 79. He had an unfortunate fall at home where he hit his head and then ultimately died of a subdural hematoma 24 hours later. He was a loving and caring husband, father, Papa, son, brother and uncle. He was also a loyal friend to many. He is preceded in death by: grandmother Juana DeCamp, parents Lauro and Luz Villagracia, and brother Albert Villagracia. He is survived by his children: Maria, Gil, Marisa, son-in law Victor, and grandson Javier. Gil was born in Lubang, Occidental Mindoro in 1942. He is the eldest of seven children. He graduated from the University of the East in Manila, Philippines and would soon immigrate with his family to Lakewood, Washington in November 1960. He married his wife, Gloria, of 57 years in 1964. He and Gloria bought a house in Lakewood, only a few minutes away from his parents where they would raise their 3 children and would continue to call home for over 50 years. Gil had many jobs when first coming to the United States, including working as a bellboy and dishwasher at the Hilton to being a welder at Todd Shipyards. He attended trade school at Clover Park Technical College, and would later obtain a job as a numerical control mechanic at the Boeing Company. He retired from the company after 34 years of service in 2004. He also helped his wife run the family business, GilMari (named after their 3 children) for many years in the 80s and 90s making silk flower arrangements and trees. Many of their floral and tree designs were used in homes featured in the Street of Dreams. During the time when he was still in relatively good health, Gil was an active walker. He loved to walk everywhere, especially with the family pet Rottweilers. He once walked from his home in Lakewood with one of the Rottweilers all the way to the storage unit they rented in University Place. They got a ride back home not because Gil couldn’t make the walk back home, but because the Rottweiler could not make the walk back home. Gil liked going to the local gym daily to work out. He was an avid photographer, who loved taking pictures of birds and flowers. Along with son-in law Victor, they would often go to the local wildlife refuge to take pictures of birds. He always talked about wanting to go to Africa for a safari photo shoot. He was once an active member of the local Filipino community club and was the designated photographer to shoot and memorialize the club’s various events. He was a devoted lottery player. He would make sure to buy Lotto tickets multiple times a week and actually won and shared a Hit 5 jackpot with 2 other winners. He was determined to win “The Big” jackpot one day. He loved to travel and would always look forward to trips back to the Philippines, where he would be happy spending time with family, eating and taking pictures. His favorite past time during the last 3 years was spending time with his only grandchild, Javier. During the summers, he would enjoy his time with Javi in the backyard watering the plants or watching the hummingbirds eat out of the feeders. He would always greet Javi with cookies, ice cream or his favorite Asian shrimp chips. Javi could do no wrong in the eyes of his Papa. When he was with Javi, he always had a smile and love in his eyes; that only a proud grandfather could show for his grandson. A viewing for Gil will be held Wednesday Sept 15th, 2021 from 5pm-8pm at Mountain View Funeral Home at the Celebration of Life Center. His funeral service will be held Thursday Sept 16th, 2021 at 11am at St. Frances Cabrini in Lakewood, Washington, followed by the interment at Mountain View Funeral Home.

Virgilio &#8220;Gil&#8221; Carmen Villagracia On Saturday August 14 2021, Virgilio passed away unexpectedly in Lakewood, Washington at the age of 79. He had an unfortunate fall at home where he hit his head and then ultimately died of a subdural... View Obituary & Service Information

The family of Virgilio "Gil" Carmen Villagracia created this Life Tributes page to make it easy to share your memories.

Send flowers to the Villagracia family.