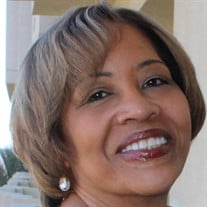 Trina Lynn (Butler) Green, also known as “Kiki” which she was affectionately called by her nieces and nephews, was born on March 31, 1956 in Tacoma, Washington. She departed this life after a battle with a rare form of dementia, on February 21, 2022 in Las Vegas, Nevada, surrounded by her two loving sons, her daughter-in-law and her sister Nina. Trina was happiest when she was with her sons and grandchildren. She spent the last two years of her life living with her youngest son Terrell and his family. Her firstborn, Maurice, was always there to provide care for her, as well. She was preceded in death by her mother Donna Butler, father Charles Butler, step-mother Elouise Butler, step-brother James (Lamar) Walker and ex-husband Farrand Green, Sr. During her early life she attended Stanley and Sheridan Elementary schools, McIlvaigh Junior High and Lincoln and Foss High Schools. In the late sixties, Trina’s stepmom founded a young girl’s social club. Trina was appointed the first president and the club bore her name, The Trina’s Club. The club’s purpose was to help keep young girls out of trouble and provide knowledge of how to run a social club; consisting of a president, vice president, secretary, treasurer, and a sergeant-at-arms. Members were made up of girls 12 years of age. They were taught etiquette, respect and loyalty by prominent women leaders from the community. A Trina’s Club Choir was quickly formed and The Black National Anthem was among the first songs the choir had to learn. The members displayed their singing skills by ministering to, entertaining and uplifting the spirits of the elderly in nursing homes. On one visit, they were honored to meet the late Dr. Nettie Asberry, one of Washington’s most influential civil rights advocates; an iconic Black leader in Tacoma’s Hilltop, who helped found the Tacoma chapter of the NAACP. The Trinas took cooking classes and used their skills by selling chicken dinners as a fundraiser. They learned to prepare formal table settings, serve at teas, model in fashion shows and provide services at other community events. Trina was known by her “lady like” language and could never be tricked into saying a “bad word”. She will be remembered for her love of cooking (and baking birthday cakes for her grandchildren) and hosting friends and family in her home. She enjoyed weekend get-a-ways and birthday dinners with her special friends. She also enjoyed her visits to the Emerald Queen Casino trying her luck at the slot machines and traveling with her cousins on many “Cousin Weekend” trips and family reunions. There was never a question as to what her favorite color was, in fact in recent years, she would ONLY wear blue fingernail polish. Throughout her 36 years of employment at Tacoma Costco she established many long-term friendships with both co-workers and customers and she will be sorely missed by them. She is survived by her sons Maurice (Cheron) and Terrell (Anna); grandchildren Terrell, Jr., Malia, Kylie and Nalaya; siblings Nina (Gary), Steve, Traci (Tony), Lori (Michael); special cousin/sister Paulette and a host of nieces, nephews and close friends whom she loved dearly.

Trina Lynn (Butler) Green, also known as &#8220;Kiki&#8221; which she was affectionately called by her nieces and nephews, was born on March 31, 1956 in Tacoma, Washington. She departed this life after a battle with a rare form of dementia,... View Obituary & Service Information

The family of Trina Lynn (Butler) Green created this Life Tributes page to make it easy to share your memories.

Trina Lynn (Butler) Green, also known as “Kiki” which she was...

Send flowers to the Green family.