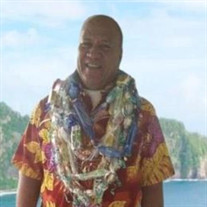 Tita’e Tagaloa, also known as “Teeh” by many, was called home to glory at 61 years of age on May 7, 2022, a month and a few days before his 62nd birthday, at Saint Clare’s Hospital in Lakewood, Washington. Tita’e fought as hard as possible from the moment he was diagnosed with many health issues, including a heart murmur which ended in an open heart surgery and a pacemaker, leukocytosis, bacteremia, and cardiopulmonary arrest which finally ended his life peacefully. Born on June 14, 1960 in Faleasao, Manu’a, Tita’e is the fourth of six children of the Late Moeiavatele Aloalii Tapu Tagaloa of Fitiuta, Manu’a, and the Late Fuala’au Siliniu Tagovailoa of Vatia, American Samoa. Tita’e is survived by two of his brothers, Atuaolevao Vaosa Tagaloa and Muaiao Falefasa Tagaloa, and two sisters, Alofaaga Tapu Vaielua and Vineta Tagaloa Sa. His other brother, the Late Vaisa Feagaimaalii Silise Tagaloa, passed away in 2012. Tita’e was a dedicated Teacher for the Department of Education in American Samoa for more than 35 years. He graduated from American Samoa Community College in 1981 with an Associate Degree in Teaching, and started teaching until he was sick and finally retired in 2016. Coming from a disciplined Samoan family, Tita’e worked really hard and faithful in his profession ensuring that his students are not only taught academically, but are also disciplined in the way they talk, walk, and treating others. He believed in the “action speaks louder than words” metaphor. As a result, he was able to see a lot of his students graduated with high honors and had been successful in life. Tita’e is a family person. Although he was never married, he took care of all his nieces and nephews and had provided for all of them. He was bestowed the Matai name “Aloali’i” when his father passed away in 2012. Tita’e had stayed all his life in Vatia, American Samoa, taking care of the family while his siblings are away with their own families in the United States. He is known by many for his love, and his sense of humor. Tita’e got sick in 2016, and came to Washington State where his sister, Alofaaga Vaielua, ministers with her husband Suipi Vaielua at the Congregational Christian Church of American Samoa-Fort Lewis, in Tacoma, Washington, to seek medical help. Although he misses home, his final wishes was for his body to be laid here in Tacoma, Washington, in remembrance of his sister’s calling to minister for God. A celebration of Life and Memorial Service for him will be on June 16, 2022 at 9:00am at CCCAS Fort Lewis Church, 9821 Ainsworth Ave S, Tacoma, WA 98444. Refreshments and luncheon will be served after the burial at 1:30pm at the Church Hall. Our belove brother, uncle, and friend will be surely missed by his family and friends.

The family of Titae Tagaloa created this Life Tributes page to make it easy to share your memories.

Tita’e Tagaloa, also known as “Teeh” by many, was called home...

Send flowers to the Tagaloa family.