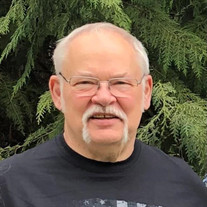 Celebrating the Life of Stephen “Pappy” Kearns. Stephen Allen Kearns of Puyallup, Washington, beloved family man and friend to many, went to be with the Lord on Saturday, November 27, 2021. Steve was the second of five children born to George and Dorothy Kearns on April 7th, 1952 in Merced, California. He graduated from Mount Tahoma High School in Tacoma, Washington in 1971. After graduation, Steve honorably served in both the United States Marine Corps and the United States Air Force. Post-military service took him to Clover Park Technical College where he earned a machinist journeyman certificate leading to a long and successful aerospace machinist career at BOEING. Upon retirement from BOEING, Steve earned an Associates Degree of Applied Technology in Human Services which he used to counsel those suffering from substance abuse. He then was blessed by living out his dream job as a school bus driver. Steve married the love of his life, Lorna, on May 18, 1970 with whom he spent the last fifty-one years. He and Lorna were members of Medical Lake Baptist Church, Mountain View Baptist Church, Elim Evangelical Free Church, and most recently Christ Community Baptist Church. For over twenty-eight years, Steve was extremely active in church youth AWANA programs where he served as a leader, director, and ultimately Commander. He also served in leadership within the church in the roles of elder and deacon. Steve was an active member of the Solid Rock Cruisers Car Club. He was a crucial member to the club’s passion of not only the love of vehicles, but the love of Jesus Christ and raising funds for local community women’s shelters and food banks. Steve was a devout family man, a lover of most music genres, classic cars, occasionally the Seahawks, and leaves us all as the reigning “Dad Joke Champion”. Steve (Pappy) is survived by his wife Lorna Kearns, sister Bonnie (Bill) Wilsey, sister Georgia Sue Kearns, son Jeff (Laura) Kearns, daughter Julie (John) Whitney, son Nathan (Carin) Kearns, grandchildren Samuel, Sammantha, Jaidyn, Kyleigh, Keegan, Traycer, and great-grandchildren Orion and Olivia. Steve is preceded in death by his parents George and Dorothy Kearns, his brother Gary Kearns, his sister Lisa Ward, and his son Stephen (Stevie) Allen Kearns. Friends and family are welcome to celebrate Steve’s life on earth on Friday, December 9th and 10th. Viewings will be held at Mountain View Funeral Home at 4100 Steilacoom Blvd SW, Lakewood, Washington from 12:00 to 7:00 pm on the 9th. Graveside services will be held at the same location at 11:30 am on the 10th with a memorial in celebration of Steve’s life at 3:00 pm at High Pointe Church located at 11501 224th St E. Graham, WA.

Celebrating the Life of Stephen &#8220;Pappy&#8221; Kearns. Stephen Allen Kearns of Puyallup, Washington, beloved family man and friend to many, went to be with the Lord on Saturday, November 27, 2021. Steve was the second of five children... View Obituary & Service Information

The family of Stephen Allen Kearns created this Life Tributes page to make it easy to share your memories.

Send flowers to the Kearns family.