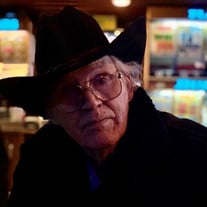 On Tuesday, July 13, 2021, Ronald Dean Angell, loving husband, father, brother and the greatest “Uncle Ron”, passed away at the age of 75. Ron was born on August 24, 1945 in Oregon City, Oregon to Myron and Aleatha (Rogers) Angell. He graduated from Shadle Park High School in 1964 and served in the U.S. Army from 1964 - 1969, including time stationed in Germany. He was a talented mason and builder, passing his trade and skills onto his nephew, Jeff. On November 9, 1978, he married Zahra Angell. They raised one daughter, Veeda Angell. Ron was a simple, hardworking gregarious man with an infectious smile, corny jokes and passionate spirit. He loved animals dearly, always with a dog by his side. He enjoyed the mountains and was a fine horseman, known by all as an old cowboy. He shared his love of animals and horses with his daughter, Veeda. Ron was preceded in death by his father Myron, mother Aleatha, foster mother Fern and countless animals he loved and cared for. He is survived by his wife Zahra, daughter Veeda, brother Gary, foster brother Don, beloved nieces and nephews, many friends and distant son and granddaughter. Ron will be laid to rest at Mountain View Memorial Park at a private family graveside. Share your memories of Ron and condolences to the family by visiting the tribute wall.

The family of Ronald Dean Angell created this Life Tributes page to make it easy to share your memories.

Send flowers to the Angell family.