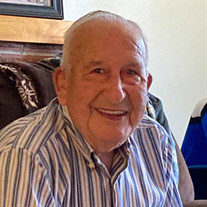 Robert Francis (Bob) Turney, of Lakewood Washington, passed away on January 14, 2022. He is survived by his children Gary Turney (Sue Webb), Jo Ann Walker (Larry), Roberta Coker, and James Turney (Donna), as well as his brother Johnathan Turney (Nancy) of Stigler OK, 8 grandchildren and 4 great-grandchildren. He is preceded in death by Rosemary Turney, our mother and his wife of 38 years, as well as his second wife Janice Turney, and 8 siblings. Bob was born in Stigler OK, on May 18, 1929, where he grew up on a farm with 9 siblings. Upon graduating from Stigler High School in 1947, Bob began to pave his own path by enlisting in the US Army. In the Army, Bob was trained as an LPN and served tours of duty in Walter Reed Hospital, Germany, Valley Forge Hospital, Ft. Lewis, Korea, Germany again, and Ft Gordon. In 1967 Bob retired as a Sergeant First Class with a distinguished military career that he enjoyed and often regaled family and friends with Army stories. In 1968 Bob moved his wife and children back to Lakewood WA, a place he fell in love with in 1960. He lived there until his death. He immediately began a second career as a LPN at the American Lake VA Hospital, working with psychiatric patients. He enjoyed his job and often rode a bike to work because he lived close by. In 1991 he retired from the VA after 23 years and receiving many awards and commendations. Bob loved to travel. While in Germany, he took his family on trips throughout Europe. Back in the States, he always owned a trailer and camped throughout the US. He often stayed in National Parks and historic sites, which he thoroughly enjoyed and loved sharing with his family. He was heavily involved with his children in both Boy Scouts and Girl Scouts, and twice he and Rosemary took their daughters’ Girl Scout Troop on camping trips across the US. In retirement he headed south in the winter for months at a time, sometimes with grandchildren in tow, making friends wherever he went. Bob was active in the Lake City Community Center, where he played bingo every Saturday night for years and helped Rosemary manage the center. He also helped with other club activities, among them dances, luaus, and Scout meetings. Bob’s wry observations and wise advice guided his children into adulthood. He always appreciated a practical joke, even if it was on him. Though his health limited him the last couple of years, he always said he’d had a good life. He was loved and was loved well, and he will be missed.

The family of Robert F. Turney created this Life Tributes page to make it easy to share your memories.

Send flowers to the Turney family.