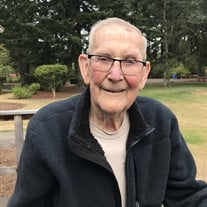 BEARDLESS WANDERER SETTLES DOWN Dick Burton was the 6th child born to Mabel and Henry Burton on November 4, 1933 in Devine, Texas and passed away on April 7, 2022. He was preceeded in death by his wife (Sabina) of 53 years, his parents, and all of his four brothers and one sister. He is leaving behind two daughters, Elizabeth Zimmerman and Deborah Cope and one son, Richard Jr. This was pretty much a military family as between Dick and 3 brothers: they had a cumalative total of approximately 100 years of military service, which Dick had 24 years serving throughout the world with one combat tour in Korea in 1950-1951 and two combat tours in Vietnam between 1968 and 1972. He retired as a chief warrant officer in July 1977. In the early 50's, Dick was known throughout Texas and Missouri as the beardless wanderer. At the age of 17, he was driving interstate trucks hauling everything from grain to watermelons for a firm in Joplin, Missouri until they learned his age, then he went to become a roughneck in the oil fields, again until they found out he had not yet reached his 18th birthday as they said it was too dangerous type of work for a kid. All of that after he had spent almost a year as a combat infantryman in Korea where he had been shot at and missed, then shot at and hit. Shortly after his 18th birthday, he returned to work in the oil fields and after a days work it was common to find Dick on the tennis courts at 2, 3, or 4 in the morning. He was a disabled American veteran that had received a total of 27 military awards for his services which included: combat infantryman's badge, purple heart, two bronze star medals, one air medal, 2 awards of the cross of gallantry, 1 with bronze star with palm, three Vietnamese service medals, with silver star and 2 bronze stars, several meritorous service medals, 4 Army commendation medals, and numerous good conduct medals plus other service medals and certificates. Our father, an officer and a gentleman, was greatly loved and will be forever missed.

BEARDLESS WANDERER SETTLES DOWN Dick Burton was the 6th child born to Mabel and Henry Burton on November 4, 1933 in Devine, Texas and passed away on April 7, 2022. He was preceeded in death by his wife (Sabina) of 53 years, his parents, and... View Obituary & Service Information

Dick Burton was the 6th child...

Send flowers to the Burton family.