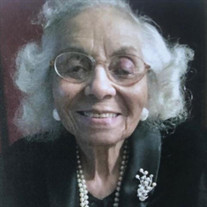 “Only a moment you stayed, but what an imprint your footprints have left on our hearts.” Dorothy Ferguson, Poet Raynola F. Blackshear Raynola F. Blackshear was born to the late Ramon and Katie Thompson Ortega on May 23, 1921, in Okmulgee, Oklahoma. She had four brothers, Raymond, Reuben, Karl, and Donnie (preceded her in death), three sisters, Vedrene, Dolores (Pretty) (preceded her in death), and Brenda. In her early childhood, she relocated with her parents to Kansas City, Kansas, graduating with perfect attendance from Sumner High School in 1939. After high school, she continued her studies. Raynola married Earl Blackshear (preceded her in death) in1945 and joined him early in their marriage for four years when he was stationed in Japan. Her lifetime commitment to global community service distinguished her as a leader in her community. She was the Past President of the Toastmistress International, charter member of the Links, Inc. Tacoma, whose mission she supported of engaging in educational, civic, and inter-cultural activities in the communities they serve, and Washington state parliamentarian. As parliamentarian, she presided over governors’ meetings where she famously said “this man is going to be president one day” regarding Bill Clinton. Raynola's career expanded over many years until retirement. She had a distinguished career as secretary to the Commanding Generals at Ft. Lewis, home to I Corps which later merged as Ft. Lewis/McChord (JLMB), 62d Airlift Wing Southwest Tacoma, Washington. She was a member of the Life Center Church in Tacoma, Washington. Raynola and Earl handprints are all over the nieces' and nephews' lives, inspiring them to community service. As the matriarch, along the way, she was more than an aunt, but a mother. She was an accomplished woman, taking the natural talents she was born with and used them to create a life filled with caring, compassion, kindness, and love. These are the gifts always seen and refreshed in the family. We will forever respect her for the aunt and mother to us all. The wind beneath our wings allowed us to soar so high that we touched the sky. We wanted her to stay with us, but she went to sleep, and a higher power called her name, and she went to receive her crown. She leaves to cherish her precious memories and legacy one sister Brenda (whom she named) Williams (Fritz), nieces and nephews, great-nieces and nephews, great-great-nieces, and nephews, and cousins. She also leaves one brother-in-law, Robert Williams, and a host of friends.

The family of Raynola Blackshear created this Life Tributes page to make it easy to share your memories.

“Only a moment you stayed, but what an imprint your footprints...

Send flowers to the Blackshear family.