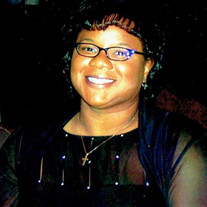 Quota-Tisha Chrisvon Johnson, “Tisha” to her family and friends, was born to Eugene and the late Christina Thomas – Johnson on November 12, 1980 in Tacoma, Washington. She was the second of three children. Tisha was a beloved daughter, sister, and friend. She had the most beautiful smile, and a laugh, that could simply light up anyone’s soul. She was an avid reader. Her favorite book to read was her Bible, and her favorite passage to read was Psalm Chapter-27. At the age of 13, Tisha accepted Jesus, The Christ as her Lord and Saviour on July 31, 1993, while her family was station at Ft. Richardson, Alaska. As she grew, her confessed love for her Lord and Saviour, JESUS, THE CHRIST grew as well. She attended Henry Foss High School, in Tacoma, Washington and graduated in 1999. Tisha was determined to farther her education, so after completing high school, she attended Highline Community College and earned an Associate of Arts Degree. Still not being completely satisfied with her educational attainments, she attended CentralWashington University, where she earned a Bachelor of Science Degree. However, the one accomplishment for which Tisha truly treasured the most was the Human Services Company that she founded_ “Self – Reliant Endeavors, LLC. She poured her heart and soul into her company and continually helped many less privileged and disadvantaged individuals. Tisha was one that would speak up if she saw an injustice being done against another person. She had the heart of a lion when it came to defending those she loved. Tisha was very adventurous and loved to travel. She was known for traveling long distances just to spend the weekend in a specific book store reading different books for hours. As a result of her father being in the military, Tisha lived and visited numerous places to include, Alaska, Texas, Georgia, and Colorado. Tisha will be greatly missed by all those that knew and loved her. She leaves to cherish her memories, her father Eugene (Pamela) Johnson of Hephzibah, Georgia; four sisters; ShervonneY. Barnett (Daniel Asmelash) of Seattle, Washington; Ebony M. Johnson (Martrise Myer) of Tacoma, Washington; Erica E. (Kaleam) Pack of Denver, Colorado; Tawanna T. (Johnny) Powell of Aurora, Colorado, and one uncle, along with a host of aunts, cousins, nieces and two very special close and dear friends Tiffany Gordon and Wilma Amaranto

Quota-Tisha Chrisvon Johnson, &#8220;Tisha&#8221; to her family and friends, was born to Eugene and the late Christina Thomas &#8211; Johnson on November 12, 1980 in Tacoma, Washington. She was the second of three children. Tisha was a beloved... View Obituary & Service Information

The family of Quota-Tisha Chrisvon Johnson created this Life Tributes page to make it easy to share your memories.