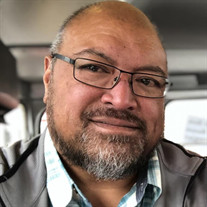 Pesamino “Mino”Anthony Pele, Jr December 28, 1965-April 7, 2022 On the afternoon of April 7, 2022, beloved husband, father, brother, uncle, and friend, Mino, Jr passed away suddenly in Tacoma, WA on April 7th, 2022 following a traumatic brain injury he sustained due to a fall. For his immediate and extended family, life is forever changed. Mino was born December 28, 1965 in Fort Leonard Wood, MO. Mino was a graduate of Lakes High School in Lakewood, WA and attended Colorado State University before transferring to Eastern Washington University on full-ride football scholarships. Shortly after graduating college, Mino began working at Boeing as a Manufacturing Engineer in Auburn, WA, where he had been for 30+ years. Mino is survived by his wife, Crystal (née Ward); daughter, Josephine “Jo”; sisters, Catherine Liafau, Christina Pele-Olo (Joey), Frances Pele-Alefaio (Puni); brother, Daniel (Tamara). Mino is also survived by his nephews, Kevin and Cody Showalter, Tysen and Nehemiah Olo, and Daniel Pele; two dogs, Housh and Pepper, and a cat, Stormy. Mino is deeply loved and missed by numerous others including an extended family of aunts, uncles, cousins, and friends. He is preceded in death by his parents, Pesamino, Sr and Betty Pele. Mino had a deep love for his entire family, which loved him deeply in return. He met Crystal while attending EWU, followed by 9 years of dating before 24 blessed years of marriage. His daughter, Jo, was born in 2003 and instantly she had him wrapped around her finger - although he would occasionally try to act as though it wasn’t the case. Mino was a passionate Seahawks fan, and a season ticket holder since 2002. He had a wide range of interests which included sumo, photography, collecting sports memorabilia, astronomy, woodworking, video games, air guns/target shooting, taking over school projects that had any sort of engineering component, laughing and making goofy jokes. Anyone who knew Mino would tell you that there was almost nothing you could ask him that he wouldn’t know something about and if he didn’t know then he would search for the information. No matter how many interests he had, his number one love was always his family, which is why Mino is, and will always be, so deeply missed.

The family of Pesamino Anthony Pele created this Life Tributes page to make it easy to share your memories.

Send flowers to the Pele family.