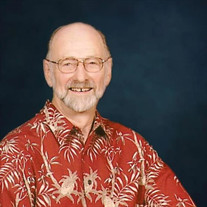 Paul Heffernan went home to be with the Lord in January 2022. Paul was born in Ellensburg, WA, but his birth was never recorded in any official capacity. He grew up in Black Diamond, WA completely unaware of his lack of legal standing in the State of Washington, though he would later have to devote considerable effort to legally prove that he had, in fact, been born. Paul graduated from Auburn High School and was a long time employee at PACCAR in Renton, WA before retiring from Ingersoll Rand in Seattle, WA. Following his retirement, Paul and Bonnie travelled to Romania and then explored the USA by motorhome for several years, making many new friends along the way, before relocating to enjoy an active life in Yuma, AZ. Paul was a caring person who generously gave of his time and talents to help his many neighbors and friends in Yuma. He and Bonnie were actively involved in their church and also regularly volunteered at a local nursing home, providing company and fellowship for the residents. Paul is survived by Bonnie, his loving wife of 32 years, his daughters Denise (Charles) and Timi (Don), son-in-law Reed (Katrina), 16 grandchildren, 27 great-grandchildren, 4 great-great grandchildren, his sisters Doris and Ruth, and his brothers Chuck and Dennis. He is preceded in death by his parents Emmy and William, his daughter Katrina, his sisters Mary and Nancy, and his brothers Dale and David. Paul will be deeply missed by all who knew him. A Celebration of Life service will be held Friday, February 18th at 1:00 pm in the Garden Chapel at Mountain View Funeral Home (4100 Steilacoom Blvd. SW, Lakewood, WA 98499). Visitation will take place immediately after the service. A reception following the service will be held at 6418 S Gove Street, Tacoma WA 98409. In lieu of flowers, the family requests that donations be made in Paul’s honor to the Franciscan Hospice organization in gratitude for the wonderful care and comfort that they provided in the last months of Paul’s life. Franciscan Foundation PO Box 1502 Tacoma, WA 98401-1502 253-680-3696 https://www.chifranciscan.org/our-foundations/franciscan-foundation/donate-now To view the services by livestream, please follow the link below: http://webcast.funeralvue.com/events/viewer/68937

Paul Heffernan went home to be with the Lord in January 2022. Paul was born in Ellensburg, WA, but his birth was never recorded in any official capacity. He grew up in Black Diamond, WA completely unaware of his lack of legal standing in the... View Obituary & Service Information

The family of Paul G. Heffernan created this Life Tributes page to make it easy to share your memories.

Paul Heffernan went home to be with the Lord in January 2022.

Send flowers to the Heffernan family.