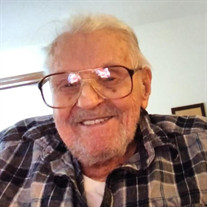 Myron Arthur West, 100 years old, died Friday, October 22, 2021 after a brief illness. He was a devoted husband, father and grandfather. Myron was born April 21, 1921, in Prosser, Washington, to Albert and Gertrude West. The family moved to Los Angeles, California, and, later, to Chilliwack, British Columbia. After high school, Myron returned to the United States to work for Boeing Aircraft in Seattle. During World War Two, he joined the U.S. Army and was initially stationed in England as part of a mobile repair unit working to get damaged bombers back into the fight. His next posting was to an airbase in Poltava, Ukraine, where he was among a small contingent of Americans maintaining bombers after they completed their missions over Germany. Myron was thrown into the Battle of the Bulge as a replacement in the 87th Infantry Division (“The Golden Acorns.”) He had numerous harrowing experiences during the war and also saw firsthand the horrors of The Buchenwald concentration camp shortly after its liberation. Myron was very proud of his military service and was active in many veterans groups. Myron returned to Seattle after WW2 and eventually joined Shuck’s Auto Supply as a salesman. He met Monica Seiter at a dance and they married in 1950. Monica and Myron were together for 54 years until her death in 2005. He went to work for American Tobacco in 1955 as a salesman and was soon promoted to the position of Tacoma District Manager. Myron stayed with American Tobacco until his retirement in 1984. During retirement, he enjoyed traveling with Monica, organizing his stamp collection and tending to his yard and garden. Myron loved people and he will always be remembered for his sincerity, dedication to family and willingness to help others. He had a quick, quirky wit. You never knew what he would say but you knew it would make you laugh. Myron is survived by his cat, Tasha; his three children, Barbara Foard, Michael, Mark and his spouse Suzanne; his grandson, Andrew Foard; and his sister, Dorothy Seibert. The family would like to thank the staff at Brookdale-Allenmore Assisted Living for all the good care they gave him in his last years. Myron said “It feels like home.” We also thank his doctors, nurses and all the other workers at both St. Joseph’s Hospital and Franciscan Hospice House for their tireless efforts on his behalf.

Myron Arthur West, 100 years old, died Friday, October 22, 2021 after a brief illness. He was a devoted husband, father and grandfather. Myron was born April 21, 1921, in Prosser, Washington, to Albert and Gertrude West. The family moved to... View Obituary & Service Information

The family of Myron Arthur West created this Life Tributes page to make it easy to share your memories.

Send flowers to the West family.