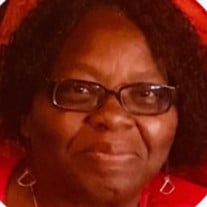 Mildred Louise Miller was born on May 29, 1952 in El Dorado, Arkansas; the fourth of seven children to L.C. and Onevia Miller. She transitioned to her heavenly home on June 24, 2021. She moved to Tacoma as a child; graduating from Lincoln High School. She worked for King County Public Health for over 30 years; retiring in 2007. She went back to school and received her Bachelor’s Degree from The Evergreen State College in Tacoma. Mildred was an avid traveler visiting places such as: Italy, the Bahamas, South Islands, Jamaica, Puerto Rico, Mexico, and various states including Hawai’i and a cruise to Alaska. She was ready to go at a moment’s notice. Often taking summer trips with her nephew Andrew, traveling partner Mrs. Sandra Lau and many other people too numerous to name. Mildred enjoyed giving her time helping others. She served as mentor and youth advocate for Pierce County. She was a faithful member of Sheridan Street Church of God for over 50 years serving in various capacities. She often attended weekly Bible Study and workouts at the YMCA with her cousin Billy Ray Ingram. Here to cherish her memories are: Anthony Miller (Tiffany), her grandchildren, who affectionately referred to her as Madea, Azariah and Emmanuel Miller. Her brother-in-law, Mickie Scott, Sr. Her sisters-in-law, Michele Lounsbury and Paula Miller. Seven nephews, three nieces, five great nephews and five great nieces, one great-great nephew and two great-great nieces, her beloved four-legged companion Tison and a host of other relatives. Her son Alphonso (Tyre) preceded her in death as well as her parents, L.C. and Onevia Miller. She was the last surviving sibling. Her two sisters, Mary Jones and Margaret Scott and four brothers: John L., Paul, Hozie, and Chester Miller, all preceded her in death.

Mildred Louise Miller was born on May 29, 1952 in El Dorado, Arkansas; the fourth of seven children to L.C. and Onevia Miller. She transitioned to her heavenly home on June 24, 2021. She moved to Tacoma as a child; graduating from Lincoln High... View Obituary & Service Information

The family of Mildred L. Miller created this Life Tributes page to make it easy to share your memories.

Send flowers to the Miller family.