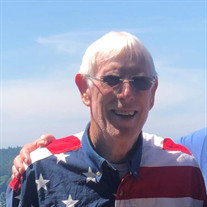 Mick (Michael) Johnson of University Place passed away to the Heavenly golf courses on 2/22/22 from unexplained severe anemia and dementia peacefully at Allenmore Hospital. His family is grateful to all Hospital Staff who cared for him in such a loving way his last week. Mick was born in Tacoma, raised in Lakewood, and started Abbey Carpet and Floor of Tacoma almost 50 years ago (this summer!) after briefly owning a carpet cleaning company. His original Abbey location was on South Tacoma Way, (word has it Mick had an iguana and a parrot there!) and then Mick built the current store on 74th St. in 1996, the same year he met his 2nd and current wife Mary Covelli Johnson. Mick’s Abbey was one of the first 3 Abbey stores to be opened (now numbering around 800 nationwide). Mary and Mick were married in 1998, and after Mick’s dementia became noticeable a few years ago, she became more involved and is still operating the business, insisting on keeping his reputation for great Customer Service with Value to everyone as his legacy. And this store has a rabbit named Abigail who Mick pampered, but he loved our dog Sammy, and whom he took for long walks as long as he could. Mick loved golf . He was a Lefty, and a darn good golfer! He was a member at Oakbrook Golf and Country Club for many years, and then moved to Tacoma Country and Golf Club in 2011. Mick practiced DAILY in the late afternoon, first at Tacoma Firs (close to Abbey), and when it closed, at the TCGC. He enjoyed videotaping himself on his phone, and then watching it at night. He never stopped working on his game both with exercises at home, and on the course. Mick is survived by his wife Mary, his son Christopher (whom he adopted when he married his first wife Cynthia ) Mary’s girls Melissa West and Cassie Smithco, and Mick’s 5 grandchildren, Tessa, Camden , Caylah , Chelsea, and Maya who affectionately called Mick “Papa Mick”. He is also survived by his sisters Kathy Brownfield, DeeDee Carlson, and his brother David Johnson and their families. Mick was predeceased by his parents, and Mary’s daughter Cara who used to bake and bring Mick goodies, for which his “sweet tooth” was very grateful. Mick joined the Rotary Club of Lakewood in 1987 and was Club President in 2010-2011. He has served on the Paul Harris Committee, the Program Committee, the Foundation, and was a willing volunteer at the Rotary Auction, and many other events over decades. He loved being a part of Rotary, and giving back to the Community and gave generously to the Rotary Foundation. Mick has been described as a calm and gentle soul, a true gentleman, and customers always described him as a very nice man. He was polite to the end, (though not politically correct ). Mick accepted Jesus as his Lord and Savior and was baptized many years ago at Life Center, and I expect he is happily golfing with Rush Limbaugh and Ronald Reagan, both of whom he admired. And of course he’d try to beat Jesus if He joined to make a foursome! A private burial will be held, and then a Celebration of Life and remarks will be held at Tacoma Country and Golf Club on Saturday, March 26 at 2 pm, followed by mingling and a sampling of some of Mick’s favorite foods. Any and all who knew and cared about Mick are welcome to attend.

Mick (Michael) Johnson of University Place passed away to the Heavenly golf courses on 2/22/22 from unexplained severe anemia and dementia peacefully at Allenmore Hospital. His family is grateful to all Hospital Staff who cared for him in such... View Obituary & Service Information

The family of 'Mick' Michael Johnson created this Life Tributes page to make it easy to share your memories.

Mick (Michael) Johnson of University Place passed away to the...