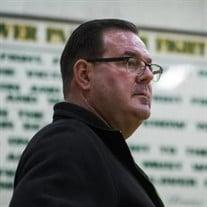 Born in Puyallup, WA on June 18th, 1956 to Robert and Jo-Reta Ninnis. Affectionately known by his friends as Mel, he grew up as a country boy working at the local lumber mill in Shelton, WA. In his free time, Mel fished for steelhead with his father in the Satsop river and enjoyed working on his motorcycles. Mel was a rising basketball star at Shelton High School and later went on to play basketball at Fort Steilacoom Community College where he met the love of his wife, Alice Wetmore. It was love at first sight. They were married on April 21st, 1979, and recently celebrated their 42nd wedding anniversary. Mel continued his basketball career at Central Washington University where he double-majored in Drivers and Physical Education. Together, Mel and Alice opened the legendary Ninnis Driving School in 1988, which they ran for 20 years. Mel began his teaching and coaching career at Clover Park High School in 1985. Mel was known for his natural teaching skills and his ability to engage the class with his passionate personality, and of course his infamous jokes. There was no denying Mel's love of teaching in the classroom and on the court. Under Mel's coaching leadership the Clover Park Boy's Basketball team obtained 14 league and district titles, 6 state appearances, and a State Championship title in 2011. Mel wholeheartedly poured his time and resources into the lives and homes of his students and players. Often opening his own home to feed the team on game nights, providing tangible resources to those in need, and always encouraging and speaking words of life. Mel retired from teaching in 2018 but continued the role of Head Coach. Mel's efforts in the community did not go unnoticed, he earned awards of his own including, Harry E. Lang Learning and Leadership Award, Elks Distinguished Citizenship Award, South Sound League Boys Coach of the Year, Paul Harris Fellow Humanitarian Award, and was inducted into the Washington Interscholastic Basketball Coaches Association Hall of Fame in 2016. Above all these awards his greatest achievement was the title of "Papa" to Elijah John (10), Abraham Adair (7), Judah John (6), Haunalei Noel (6) Benjamin Oakes (4) Esther Grace (4), and Mabel Jean (2). During his retirement Mel spent countless hours on the Hood Canal fishing for salmon, shrimping with Dr. Bill and Tim, relaxing on the deck with Alice, combing the beach for clay babies, and building bonfires with his grandkids. Mel and Alice had a deep and true love. Mel never missed an opportunity to tell his wife and kids how much he loved them, what joy they brought to his life, and how proud he was of who they have become. Mel's absence in our community is already deeply felt. However, the impact and legacy he leaves behind with his family, ballplayers, students, and friends will live on. Mel is survived by his wife Alice, son Robert Ryan (Rebecca) Ninnis, Kevin (Casey) Ninnis, daughter Renee Ninnis, sister Mari Cody, brothers Burdette (Kim) Wetmore, John (Charlena) Wetmore, Dale (Elizabeth) Wetmore, David (Chanel) Wetmore, Tony Wetmore, mom Donna Wetmore, and many nieces and nephews. A Celebration of Life is to be held at Clover Park Gymnasium on Saturday, August 21st at 2 pm. A private burial ceremony with family to be held separately.

Born in Puyallup, WA on June 18th, 1956 to Robert and Jo-Reta Ninnis. Affectionately known by his friends as Mel, he grew up as a country boy working at the local lumber mill in Shelton, WA. In his free time, Mel fished for steelhead with his... View Obituary & Service Information

The family of Mel Ninnis created this Life Tributes page to make it easy to share your memories.

Send flowers to the Ninnis family.