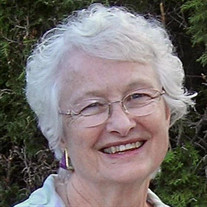 On Sunday, November 21st, 2021, Marta Lu Firman, our wonderful and loving Mom, grandma, great-grandma, sister, aunt, cousin, and friend left this earth to be with the Lord Jesus. Marta was born on September 22, 1936, in Olympia, Washington, to Orville Burr and Emogene (Duncan) Smith. She grew up in Sutherlin, Oregon, including some years in Fords Camp, a nearby logging camp at Nonpariel. She graduated from Sutherlin High school in 1954, and shortly after met our Dad, Richard Stockton Firman. They were married on September 4, 1955 in Sutherlin. They both attended and graduated from the University of Oregon in 1959. They had Gina in 1957, Shana in 1960, Rob in 1963, and Erica in 1964. Mom and Dad taught us the ways of the Lord and the ways of the outdoors. Mom was gracious, kind, and caring, and was always ready to give of herself to her family or those in need. She was the anchor of our family, with our gatherings centered on where she was, when possible. She was always present and interested in each person’s stories. She loved life to the fullest. Marta was preceded in death by her parents and her husband, our loving dad Richard, in 1995. She is survived by her four children Gina Nikkel (Bob), Shana Sand (Art), Rob, Erica Firman-Love (Chris), seven grandchildren, Jessica Antrim (Sean), Jared Havens (Megan), Lacey Hawkins (Ukiah), Chantelle Vega (Aaron), Kelly Hovland (Chris), Reggie Glaspie (Kristy), Jasmine Glaspie. 14 great-grandchildren, her brother and sister-in-law, Bill and Malva Smith, her brother and sister-in-law Don and Jane Smith; and numerous nieces, nephews and cousins. All whom she loved and adored

On Sunday, November 21st, 2021, Marta Lu Firman, our wonderful and loving Mom, grandma, great-grandma, sister, aunt, cousin, and friend left this earth to be with the Lord Jesus. Marta was born on September 22, 1936, in Olympia, Washington,... View Obituary & Service Information

The family of Marta Lu Firman created this Life Tributes page to make it easy to share your memories.

Send flowers to the Firman family.