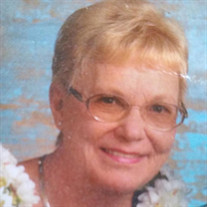 Marlys passed away peacefully on Tuesday October 13, 2021 in her home at the age of 84. She was born in York, North Dakota on April 27, 1937 to Oscar and Clara Bod. Her family moved to the Tacoma, WA in 1942. She was the youngest of 6 children; three brother Orris Bod (deceased), Curtis Bod (deceased), Dennis Bod, and two sisters Eunice Heaston (deceased), and Gladyce Butler (deceased). Marlys and her mother Clara were always taking road trips looking for a home on the water. While her mother Clara never saw the home Marlys did make this dream come true when she bought her beach house in Arletta, WA in 1973. She lived there with her youngest daughter Tracy for almost 40 years. During those years she worked at Rhodes Dept store managing the beauty salon, the Peninsula School District, and Safeway where she retired from in 1999. It was at Safeway where she re-met her Junior High School love Ken Huppert. They married in 2001 and traveled the world together like teenagers until Ken passed in 2008. The went on many cruises, plane trips, and road trips in those 8 years. They went to Hawaii several times, New Orleans, Florida, Arizona, Canada, Greece, Turkey, Egypt, London, and many more. Ken preceded Marlys in death after a hard fought battle with a lung disease. She often said those 8 years were some of the best in her life. After Ken's passing she discovered her next passion in life which is the American Veteran's Organization (AmVets). She became an active member and often participated in their many events. While she was an Auxiliary member she also helped the Sons of Am Vets Post 1 in many endeavors; so much so she was given the highest honor you can get when she was presented with an Honorary Sons of AmVets jacket. She was most proud of this honor. She made many friends at AmVets and was very happy when her two daughters Tracy and Sheree joined the club to carry on her work. She enjoyed playing Texas Hold'em, fundraising, (she holds the record for selling the most raffle tickets on Super bowl Sunday), and socializing with her AmVet friends. She was still planning on what she was donating and doing to the very end--don't worry Mom, Tracy will take care of it. Her greatest love was her family, especially her 2 grandchildren; Dyane Kruse and Chris Wight and 3 great grand children Caprice Wight, Ava Wight, and Alora Kruse. Her motto was "feed them sugar send them home," and they will all tell you breakfast at Grandma's was often ice-cream. She is survived by her brother Dennis Bod, her daughters Sheree Doane, Kim Falsetta, and Tracy Muntz. Also her grandchildren and many nephews and nieces whom she dearly loved. Marlys requested to be cremated and no services to be held. The family will respect and carry out her wishes. In lieu of flowers please donate to The Sons of Am Vets Post 1 Tacoma, VFW 969, or your local trusted Veteran's Organization.

Marlys passed away peacefully on Tuesday October 13, 2021 in her home at the age of 84. She was born in York, North Dakota on April 27, 1937 to Oscar and Clara Bod. Her family moved to the Tacoma, WA in 1942. She was the youngest of 6 children;... View Obituary & Service Information

The family of Marlys Huppert (Bod) created this Life Tributes page to make it easy to share your memories.

Send flowers to the Huppert family.