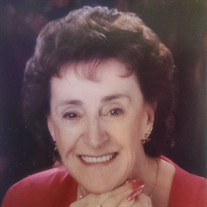 **Graveside Funeral Services have been rescheduled for January 11th, 2:30pm at Mountain View Funeral Home.** Marianne Kathryn Carson, age 92, danced up to heaven the morning of December 8, 2021to be reunited with her loving husband. As the matriarch of a her large family and a friend to many, she was surrounded in love during a brief battle with pancreatic cancer. The youngest of seven children, Marianne was born on May 23, 1929 in Dickinson, North Dakota to Peter Aaron Swanson and Anna Kathryn (Mangan) Swanson. She joined her 5 living siblings, Alice, Florence, Lowell, Richard, and Rolland. At just over a year old, her father was killed in a railroad accident in Beach, North Dakota leaving her mother a young window. A little less than a year later, Christopher J. Karras an acquaintance of Peter befriended the family. Chris was truly a man of God who loved his family. Anna and Chris married September 3, 1931 and relocated the family to Tacoma, WA in 1932. Marianne was born during the first year of the “Great Depression” and for Chris to marry a widow with six children was no small undertaking. He was the only father Marianne knew and she was greatly loved by her parents. In the summer of 1951, at just 22 years old, Marianne met and fell in love with 23-year-old William C. Carson. “Bill” was from Robbinston, Maine and a member of the United States Air Force stationed at McChord AFB, WA. He was then stationed in Champaign, Illinois when he married Marianne on November 18, 1952 sealing a loving and unwavering commitment to each other. The Air Force took them to many places, but when Bill got a 30-day leave, they would load their three kids into the car and drive from Tacoma, WA or Robbinston, ME to see their families. Marianne and Bill have three (3) children Reginald Carl Carson, (Jan), Debra Ann Carson-Lewandowski, (George) and William Ray Carson (Kim Coffel). Seven (7) grandchildren Ryan Antone Barabe (Heidi), Abbie Ann Barabe (Troy), William Carl Carson (Andrea), Alex Griffin Carson (Olivia), David Lowell Carson (Claire), Nikolas Carl Carson, and Christopher Robert Carson. Four great-grandchildren Carson William Barabe, Reid Russell Everheart, Kiera Grace Barabe, and Ella Ann Everheart. Always part of her family also includes Mark & Marnie Barabe, Chad, Tasha, & Peyton Terhar. She was aunt to many nieces and nephews and loyal, caring and lively friend to all. As a simple woman, she was known by her grandkids for making the finest stack of pancakes on a Saturday morning and hosting a lively spur of the moment pizza party on Friday night. After working a few small jobs, Marianne followed her passion, dedicating her life to being a wonderful wife, mother, and grandma. Later in her life her four great-grandchildren enjoyed visits, afternoon tea parties and Christmas morning celebrations at her beloved house. Marianne loved people, dancing, music, gardening, painting, sewing and creating beauty. We will miss her greatly. A celebration of life will be held at Mountain View Funeral Home, Tuesday, December 28, 2021 at 11:30am.

**Graveside Funeral Services have been rescheduled for January 11th, 2:30pm at Mountain View Funeral Home.** Marianne Kathryn Carson, age 92, danced up to heaven the morning of December 8, 2021to be reunited with her loving husband. As the... View Obituary & Service Information

The family of Marianne K Carson created this Life Tributes page to make it easy to share your memories.

**Graveside Funeral Services have been rescheduled for January...

Send flowers to the Carson family.