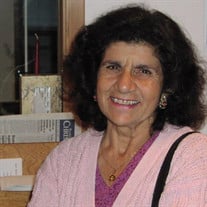 Margaret (Abrahamian) Rogers was born June 18, 1931 in Jamestown, North Dakota to Melkon & Katherine Abrahamian. She went home to heaven on July 10, 2021. She graduated from Jamestown High School in 1949 and moved to Minneapolis, Minnesota to work. She met her future husband, Jim on a Greyhound bus when she was going home for a weekend and Jim was going to a new duty station in Alaska. They married on April 7, 1951. Jim’s military career took them to Texas, Spain, England, and Washington. She worked as a medical clerk and an orthopedic secretary at Madigan Army Medical Center during her nearly 20 year career in civil service. She retired in June 1993. After her retirement, she took her final Greyhound bus trip with her husband to Branson, Missouri for a vacation. She enjoyed her family and grandchildren. When her and her two sisters who lived locally got together, it was always a rousing event. She had a soft spot for stray animals and over the years had acquired several stray cats. Those who knew her well said she had only one speed, and that was fast. She never walked slowly to do anything, it was always at a very fast pace! She accepted the Lord as a young girl and renewed her commitment as an adult. She was a charter member of Parkway Presbyterian Church. She taught Sunday School for many years there. She shared her faith verbally as she had opportunity, but mostly through her daily living. She had a very caring heart and a desire to help people. She is preceded in death by her husband, Jim, her son, Paul, her parents, three sisters, and a brother. She is survived by daughters, Angela and Peggy, four grandsons, one granddaughter, five great-grandchildren, one great-great-grandchild, three sisters and various nieces and nephews.

The family of Margaret Rogers created this Life Tributes page to make it easy to share your memories.

Send flowers to the Rogers family.