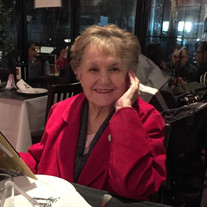 Lois Clowers lived her life with abiding love and interest in others. Born February 5, 1933 in California, Missouri, she spent her early years surrounded by her extended family. During the Great Depression she moved with her family and eventually settled in Portland, Oregon. In order to maximize cost saving for the family, her maternal grandparents, her aunt and uncle and their family and her parents and brother shared a huge house as they worked and pooled their funds. While this may have been occasionally difficult fot the adults in the home, Lois found the arrangement to be her ideal. She later moved with her parents and brother Jim to central Oregon, and attended school in Lone Pine and later Madras, Oregon. She was active in school activities, and loved to sing. She was a frequent soloist in the central Oregon area. She attended Oregon's Linfield College and married her high school sweetheart, Tom Clowers March 2, 1952. She began working as an assistant teacher at the (unfortunately named) Central Oregon School for Retarded Children in the early 1960's. She would later become the head teacher, focusing teaching primary living skills such as reading public signs, handling money and change, hygiene, and simple work skills, so that her students would be better able to navigate a world that was not well set up for them. She moved with her family to Tacoma, Washington in 1969. Throughout her life, she would consider ways to live as close as possible with her family. She was successful in that her children, grandchildren and 13 great grandchildren live with in a 10 mike radius. Her mother, Gladys Brizendine moved across the street after her husband, Lawrence, passed away. When her mother suffered a debilitating stroke, Lois immediately took her into her home to care for her. She collaborated with Catholic Community Services to develop respite and support care services for the families of alzheimer's and dementia patients. She became aware that she needed such services, but realized that other family care providers also would need the assistance. She acted for herself and others. A recognized master food preserver, she reentered the work force at Washington State University Extension, providing workshops amd becoming an FHA food preservation judge at the local fairs including the State Fair in Puyallup, Washington for many years. As a former teacher, Lois considered her job to be to help contestants improve in their next attempt. So her reviews gave tips and recommendations. She also was affiliated with the FHA student exchange program. When her daughter accepted a student from Hiroshima, Japan, the entire family welcomed him. After his time her he later returned to live with Lois and Tom for a second one year exchange. He became a beloved family member. She also had a love of taxes, which confounded those who new her, but which was ideally suited to her extreme diligent and methodical nature. Lois found tax law interesting, and began studying on her own. Then she took course work offered by H&R Block to become a tax preparer. She continued working as a top preparer each of the next 25 years, eventually specializing in and handling the more complex types of returns. She loved tax law, but her favorite part of doing taxes was her clients. Many became friends and appreciated her honesty and concern for each of their unique situations. Most of all, Lois focused on her family. No problem was too big, no crisis was insurmountable, and no mistake was unforgivable. Every child was her special child. Her married childrens' in-laws became family and all were welcome. As during her early family life in Portland, Lois loved the concept of everyone working and living together. It is how she lived her life. Lois was preceded in death by her husband Tom Clowers, infant Lois LeAnn, and her Brother Jim Brizendine. She is survived by her four children Frances Smith (Paul), Pamela Overman (Steve), Robert Clowers (Sperry), and Lisa Bergstrom (Tom). Also by her grandchildren: Brent Overman, Chad Smith, Robert B. Clowers, Valeria MacLeod, Brett Smith, Derek Overman, Melanie Jenkins, Richard Clowers, Michael Bergstrom, Kyle Bergstrom. Also her adopted grandson, Takanori Higashi and each grand childs' spouses and significant others. She also loved her 13 great grandchildren and step grandchildren. She was also well loved by her large extended families and friends. She made each person know how much she loved them, and how special they were to her. She was loved each day of her survivors' lives, and will be missed for each of their remaining days.

Lois Clowers lived her life with abiding love and interest in others. Born February 5, 1933 in California, Missouri, she spent her early years surrounded by her extended family. During the Great Depression she moved with her family and eventually... View Obituary & Service Information

The family of Lois J. Clowers created this Life Tributes page to make it easy to share your memories.

Lois Clowers lived her life with abiding love and interest in...

Send flowers to the Clowers family.