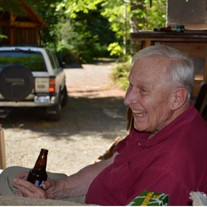 Linden E. Schuyler, 83, died suddenly and unexpectedly at home on April 3, 2022 in Lakewood, WA while caring for his beloved wife of 59 years, Sookie. He was born on October 31,1938 in Dickinson, North Dakota to Paul Frederick and Hertha (Erdmann)... View Obituary & Service Information

The family of Linden Schuyler created this Life Tributes page to make it easy to share your memories.

Send flowers to the Schuyler family.