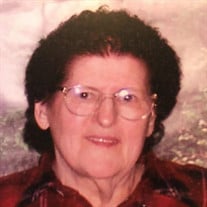 Leona (Baskett) Turosik of Midland,Washington, passed away peacefully at home on July 15, 2021, at the young age of exactly 98 1/2 years old. Leona was born on January 15, 1923, at home in Midland, Washington. She was number 9 of 12 children born to Stephen Baskett II & Anna (Chackey) Baskett. All of Leona's siblings and their spouses passed away before her. Leona was a logger at age 19. She and her brothers logged the Chambers Creek area in Tacoma (approx 68th and Bridgeport Way) from 7am until 3pm. After they fell the logs, sometimes they peeled the bark off, other times not. Then the logs were cut to length and loaded onto Leona's logging truck. She drove the load to Baskett Lumber Company where her other brothers unloaded the logs. She then drove back to Chambers Creek for another load. When she, her brother Mike and his wife Gladys were done logging for the day, Mike drove Leona to the Boeing plant (now Tacoma Soccer Center on 26th and E Bay Street) where Leona rivetted tail fins on B17 and later B29 bombers from 4pm until midnight. Leona married Paul F. Turosik, November 6, 1944. They moved to Missoula, Montana, where Paul was stationed for a year in the army. Then they moved back to Midland, Washington. Leona became a clerk and bookkeeper in her father's newly built hardware store in 1945. In the late 50's, Leona became known as the "cookie lady" at the hardware store. She always had a "circus animals" decorated cookie can filled with "windmill" cookies for the customers and their children. The company was sold in 1985. Leona, her brother Steve and his wife, Viola, purchased and ran the mill portion until they retired in 1992. Leona is survived by her 2 daughters, George and Barbara Turosik, and son, Paul (Andrea) Turosik, 4 grandchildren, 5 great grand children, and 1 great, great grand daughter. VIEWING: Friday, July 23, 2021, 12pm - 8:00pm at Mountain View Funeral Home; 4100 Steilacoom Blvd. SW, Lakewood, WA 98499. PH: 253-584-0252. (Internment will be a private, immediate family only, off site service.) CELEBRATION OF LIFE (open to all): Saturday, September 25, 2021 Mountain View Funeral Home, Willow Reception Room,12pm - 4:00PM

Leona (Baskett) Turosik of Midland,Washington, passed away peacefully at home on July 15, 2021, at the young age of exactly 98 1/2 years old. Leona was born on January 15, 1923, at home in Midland, Washington. She was number 9 of 12 children... View Obituary & Service Information

The family of Leona Baskett Turosik created this Life Tributes page to make it easy to share your memories.

Send flowers to the Turosik family.