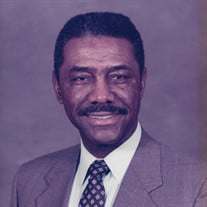 A Memorial Service honoring Leon N. Glover will be held on Thursday, March 10th, at 11:00 a.m. at Allen A. M. E. Church, 1223 Martin Luther King Jr. Way, Tacoma, Washington 98405. Leon Nathaniel Glover September 20, 1931 - February 9, 2022 With profound grief, we mourn the loss of Leon Nathaniel Glover who died on Wednesday, February 9, 2022 at the age of 90 years old. A true Renaissance Man of the 20th and 21st centuries, Leon Glover, was a man of principle and integrity, and lived a remarkable life achieving notable accolades in the U.S. Air Force, the business sector, Christian ministry, and community service. In a seven-decade span of local, regional, national and international service, his accomplishments were extraordinary. Leon strongly believed that "no man is an island", and he affirmed that all great achievements are a result of the collaboration of many. Leon was deeply admired, loved and respected by all who knew him. He enjoyed fishing at Moses Lake, camping, watching his favorite sports teams and traveling to the Caribbean Islands. HISTORICAL: Leon Nathaniel Glover was born on September 20, 1931 in Sardis, Alabama to Carrie Green and Thomas Glover Jr. He was the third oldest of twelve children. PROFESSIONAL: At the age of 19, he enlisted in the U.S. Air Force where he served his country for 20 years. He was stationed in England, San Antonio, TX, Tacoma, WA, Battle Creek, MI, and Korea. After his retirement from the military, he began his second career and flourished as a concrete construction specialist. His body of work includes the Tacoma Narrows bridge, St. Joseph's Hospital, the I-90 bridge, the King Dome and many, many more. He retired from the concrete construction business after 20 years and dedicated the remainder of his life to volunteer activities. CHRISTIAN MINISTRY: Leon served as Trustee for Allen A.M. E. Church in Tacoma, Washington. COMMUNITY SERVICE: Leon was an active member of the Egyptian Masonic Lodge and long-time supporter of the Tacoma Food Bank, where he volunteered for over 25 years. Selected Achievements and Recognition Honorably Retired, United States Air Force Service Recognition, International Brotherhood of Teamsters Member In Good Standing, Egyptian Masonic Lodge Trustee, Allen A. M. E. Church, Tacoma, Washington Founding Member, Progressive Investment Club of Tacoma Leon is preceded in death by his beloved wife of 57 years, Thelma Glover, parents, Thomas and Carrie Glover Jr., and 7 siblings. He is survived by his son, Marvin Glover, daughter Carmen Redd, grandson, Bryson Redd, sisters, Barbara Lowe-Thomas, Beverly Tufts, Eleanor "Joyce" Ghorm, Cynthia "Lora" Moon, ten nieces and nephews, numerous cousins, a host of extended family and loved ones.

The family of Leon N. Glover created this Life Tributes page to make it easy to share your memories.

A Memorial Service honoring Leon N. Glover will be held on Thursday,...

Send flowers to the Glover family.