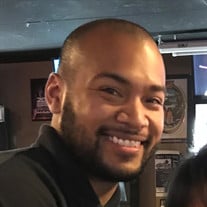 Justin Lawrence Roberts was born on January 25, 1987, to Marilou Roberts-Todd and Rufus Melton (deceased July 2021). He was also lovingly raised by Sidney Roberts (deceased August 2004) in Seattle, Washington where he spent much of his life. He was called home on June 20, 2021, after a brief illness. Justin, also known as JL by his closest loved ones, graduated from Renton High School in 2005. During his high school career Justin developed a love for music and began writing poetry and rap lyrics. This interest later grew into a serious hobby where Justin could be found performing at different venues all over the state. By July 2016, Justin matured into a career at Neighborcare Health in Seattle, WA as Clinic Administrator. There his natural leadership skills were well appreciated and admired. In February 2010 Justin met the love of his life, Denice Madison. The two wed on February 27, 2014. From their union, they shared the birth of four sons, Justin Jr. (age 6), Rue (age 5), Izaiah (age 3) and Kingston (age 6 mos). They were also blessed with an adopted son, Santino Collier (age 8), whom they raised together from birth. Justin took to family life very naturally, he was a loving husband, caring and playful father, and the protector of his home, he was his family’s King. He often said his wife and kids were the most important part of his life. JL was loved by everyone who knew him. He had an infectious smile and laugh that made it impossible not to join in. While Justin was often a serious natured guy, he also had a lighthearted sense of humor and fun-loving spirit. In addition to his wife and children, JL leaves to cherish his memory: mother, Marilou Todd; two sisters: Keisha Hall, and Ilaya Roberts; three nieces: Xavia Hall, Denae Hall, and Lauren Roberts; three nephews: Darius Hall, Daeshon Hall, and Andrew Townsend, Jr.; stepfather: Dave Todd; brother-in-law: Edward Hall; and host of other relatives and friends.

Justin Lawrence Roberts was born on January 25, 1987, to Marilou Roberts-Todd and Rufus Melton (deceased July 2021). He was also lovingly raised by Sidney Roberts (deceased August 2004) in Seattle, Washington where he spent much of his life.... View Obituary & Service Information

The family of Justin Lawrence Roberts created this Life Tributes page to make it easy to share your memories.

Send flowers to the Roberts family.