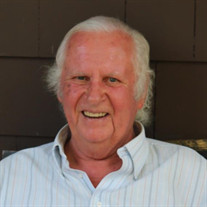 John Neil Borgert passed away on Monday, January 3, 2022 at the age of 78. He passed suddenly but peacefully with his beloved wife Mary Lou and their children by his side. John was born in Tacoma, Washington on March 9, 1943, to Alvin and Winnie Borgert. He was known as “Johnny Boy” to many family members throughout his life. John met his best friend and future wife Mary Lou in grade school at St. Francis Cabrini in Lakewood, WA. They didn’t start dating until high school but according to his sister Kedda, she was the one for him. He attended Bellarmine High School in Tacoma, Washington and married Mary Lou in 1965. During his youth, John worked on commercial fishing boats with many members of the Malich side of his family in Gig Harbor. It was this trade that instilled a love of the water in John, a passion that he had shared with his family on many vacations through the San Juan islands and British Columbia. He never seemed happier than the moments where he could pilot a chartered yacht through open waters. After his marriage to Mary Lou in the fall of 1965, the couple worked at the family store, the B&I in Tacoma and then moved the family to Yakima, WA in 1975. They operated the Country Store Shopping Center until they retired and moved to Shelton. For as long as anyone can remember, John grew Christmas trees on his property in Shelton and sold them in many places, including Hawaii! He was well known for giving away trees to those in need and from his office at Shelton Land and Homes where he was a real estate broker for many years. John impacted the lives of so many people. His smile and enthusiasm for life, politics, and learning about world events were infectious. If he didn’t know something, he would research the topic until he found the answer. Over ten years, the family had hosted approximately twenty-two exchange students and afterwards, John had kept in close contact with Paulo, Joe, Konstantine, Victor, and Tomo who regarded him as a second father. They would routinely call him for advice or just to tell him about what is going on in their lives. A true testament of how his life had impacted so many throughout the world. John is survived by his wife and best friend Mary Lou; his children Tina, Christine and Earl; grandchildren Natalie and Connor and his sister Katherine Keough, known as Kedda to family and friends, and her daughter Barbara Keough. He was a strong patriarch of the Borgert family, he will be missed by so many family and friends. A Memorial Service will take place at 10am on February 5, 2022 at Mountain View Memorial Park in Lakewood, WA in the Aspen Chapel, followed by a reception in the adjoining Willow room from 11-1. A private placement of the urn will take place later that day with family at Calvary Cemetery.

John Neil Borgert passed away on Monday, January 3, 2022 at the age of 78. He passed suddenly but peacefully with his beloved wife Mary Lou and their children by his side. John was born in Tacoma, Washington on March 9, 1943, to Alvin and... View Obituary & Service Information

The family of John Neil Borgert created this Life Tributes page to make it easy to share your memories.

Send flowers to the Borgert family.