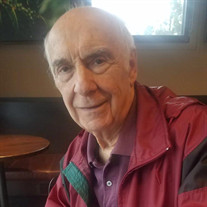 Joe Meade Ghilarducci was born in Tacoma, Washington, on October 12, 1937. He was the youngest son of Lawrence "Gilly" and Dorothy "Dotty" Ghilarducci. He lived his entire life in Lakewood, WA (previously part of Tacoma), eventually graduating from Clover Park High School in 1955. Joe initially attended Stanford University, completing two years then enlisting in the U.S. Army for a two-year term. After his discharge he chose to finish his education at the University of Washington. It was here that he met his future wife, Carolyn Davis, and they were married on April 10, 1960. They both graduated in June of 1961. Joe went to work for Merrill Lynch, Pierce Fenner & Smith the following month, and settled down with his bride in Lakewood. He was to remain with Merrill Lynch for over 35 years, retiring as a Vice President in August of 1997. Joe was active in local education and business organizations most of his life, serving on the boards of the Clover Park School District, the Lakewood Rotary, The United Way, Boy Scouts of America, Tacoma Country and Golf Club, and others. He also served as president of the Greater Lakes Mental Health Foundation and his local PTA, as well as coaching two Little League teams each season. Joe played a "little" golf, and was a dedicated Seattle Mariners fan. He and Carolyn had three children together. After retiring, Joe and Carolyn took the opportunity to travel, visiting Joe's ancestral home of Italy several times as well as many other parts of the world. After Carolyn's passing in June of 2017, he lived a quiet life in his home of 55 years in Lakewood. Joe passed away peacefully at St. Clare Hospital in Lakewood. Joe is survived by his sons Paul and Joe, his daughter Rena, and his brother Lawrence "Larry" Jr, as well as numerous nieces and nephews. He will be remembered as a man of kindness and generosity, who cared for his wife and family above all else, and he will be missed. In light of the current health crisis and concerns surrounding public gatherings, the family has chosen to hold a small private service, with a Celebration of Life planned for 2022. Donations to the Alzheimer's Association in Joe's memory would be gratefully appreciated.

Joe Meade Ghilarducci was born in Tacoma, Washington, on October 12, 1937. He was the youngest son of Lawrence "Gilly" and Dorothy "Dotty" Ghilarducci. He lived his entire life in Lakewood, WA (previously part of Tacoma), eventually graduating... View Obituary & Service Information

The family of Joe Meade Ghilarducci created this Life Tributes page to make it easy to share your memories.

Joe Meade Ghilarducci was born in Tacoma, Washington, on October...

Send flowers to the Ghilarducci family.