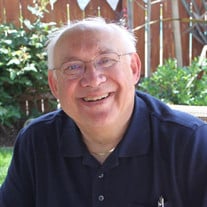 Memoriam for James (Jim) Francis Pivec Born during the Great Depression in Milwaukee, Wisconsin into what would become a large Catholic family, James (Jim) Francis Pivec left a positive mark on his loved ones, friends, and extended family before passing away during the early Easter morning of April 17, 2022. He was 84 years old. Jim outlived the love of his life, Margaret (Meg) Ann Begley Pivec, his wife of nearly six decades, by just seven months. The impact of Meg’s passing on September 18, 2021 dealt Jim a significant blow. Her death proved to be a life-changing event that he struggled mightily to move forward from as he attempted, without much success, to enjoy life’s numerous other blessings during the final seven months of his life. The eldest of eight children, Jim spent his formative years growing up in Minneapolis, Minnesota in a close-knit and boisterous family. He graduated from Southwest High School, participating in cross country and admittedly not studying as much as he should have during the process. Jim earned a business degree from St. Thomas College, a Catholic university located in St. Paul, the state capital. Following college, he ventured to southern California and embarked on a 30-year career with IBM as a computer sales associate and (later) as a sales executive. It was in sunny Pasadena, California that Jim would meet Meg, his future wife, at a party and begin the courtship process to woo her. They married in 1963, a sacred union that would span 59 years. Jim and Meg bought their first home together in Riverside, California, the city in which their first two children would be born. Jim and Meg mutually shared a love for, and dedication to, their Roman Catholic faith. Virtually without fail for the vast majority of their lives, their Sundays weren’t complete without attending a Catholic Mass service and receiving the Eucharist. Jim served his church community throughout his life as an altar boy, usher, Knights of Columbus Fourth Degree member, and church bulletin/newsletter editor. He actively looked for ways to use his significant computer and organizational skills to enhance church events by taking care of many of the scheduling and catering logistics. As a proud Fourth Degree Knight, Jim greatly enjoyed donning his Knights of Columbus attire and regalia while performing in a choir at functions with his religious brothers. Jim loved to travel with his family, seeing Europe, Mexico, Canada, the Bahamas, Australia, New Zealand, and much of the United States during his lifetime. An accumulator of numerous timeshare weeks, Jim juggled his inventory of weeks of accommodations with both deftness and flair, often donating weeks of quality resort vacation stays to his siblings’ families and the newlywed couples who expanded the Pivec family. After his father (Frank Pivec) passed away, Jim envisioned his role as the modern-day patriarch of the ever-growing Pivec family, doing his best to remember his many relatives’ birthdays and their special events with timely gifts. Jim was at his best when he could assist a relative in celebrating an important life event. He was a quietly generous and loving man who greatly valued the presence of others in his life. An erstwhile athlete who transitioned to being a supportive fan during his final three decades of life, Jim was known to be an avid competitor. He enjoyed playing tennis and racquetball with his son after teaching the two sports to Mike. He was an occasional swimmer and runner who used those two cardiovascular activities to help maintain his body weight. With practice and over time, Jim became an accomplished skier, both on the water as well as on the snow slopes. Like most Minnesota-based Pivecs, Jim was a determined and crafty card player who would patiently teach his children how to play cribbage, hearts, bridge, and blitz. Playing cards with his family proved to be for Jim the perfect end to a quality day spent with loved ones. He made a concerted effort to travel with Meg to numerous sporting events in which their grandchildren participated over the past 15 years. When asked during his final month of his life whether he had any regrets as his life was approaching its end, Jim shared that he wished he had continued to exercise regularly during his later years. His decreased mobility during the final year of his life was exacerbated by intense pain from colorectal cancer, the condition that eventually hastened the end of his life. Jim is survived by his three children (Monica Goodale, Mike Pivec, and Marianne Craypo), eight grandchildren, and six surviving siblings (Robert Pivec, Steve Pivec, Patty Pivec, Jay Pivec, Tim Pivec, and Tom Pivec). Another sister, Mary Jo Pivec, preceded Jim in death before he was a teenager. A memorial Mass and celebration of life event will be held in Jim’s honor at Our Lady Queen of Heaven Church in Tacoma, Washington on Tuesday, May 17 at 11:30 am. Thank you very much for the happiness and light that you brought to the life of Jim Pivec. You helped him become a better man who made the lives of others a little bit better and brighter. His enduring legacy of generous and cheerful giving is how he will be fondly remembered by his closest loved ones and friends.

The family of Jim Pivec created this Life Tributes page to make it easy to share your memories.


Born during the Great...

Send flowers to the Pivec family.