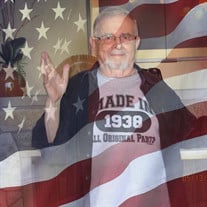 Jerry passed away peacefully at the age of 83 on February 2, 2022 at his home in Lakewood Washington. Jerry was born May 6, 1938 to Vernon L Burton and Enid Gladys Nussrallah in Deadwood, S.D. They soon moved to Rapid City, S.D. Where he and his three younger brothers were raised. He graduated from Rapid City High School in 1956. Jerry enjoyed the social life if those years. He played his saxophone in the High School band, and shooting games of pool with his buddies at “The Hole” and driving around in his 1935 Ford with the rumble seat full of friends. He always had an after school job and summer jobs to earn his own way. He learned responsibility at an early age. He and some friends also joined the South Dakota National Guard one summer and went through basic training even though they were all underage. Always looking for an adventure. After graduation he joined the US Army and was stationed in Germany. He remembers those days fondly, the friends he made, the adventure of being in Europe and playing his saxophone in a band the Army put together in the name of “ German/American Relations”. They played at the German “guesthouses” or beer halls for the enjoyment of the German citizens. He enjoyed getting to know the local people and their language. He was proficient enough to know how to understand the words “No, I go home alone” in three different dialects. Hmmmmmm After the army in 1961 back in Rapid City, he started his career in the life insurance business with a hometown company named Rushmore Mutual Life. In 1964 he met and married Janice Peterson (Jan) , his wife of 58 years and they moved to Tacoma, Wa. Jerry started his own agency with Rushmore Mutual and before the age of 30 became the Regional Vice President for the west coast. He added over 100 agents to his agency force for Rushmore Mutual. He also received his securities license. In 1969 he received his private pilot’s license. He was enamored with the feeling of freedom when flying. His friends and family enjoyed many jaunts and trips in his plane. Jerry moved his family to Wenatchee, Wa in 1979. After this move he decided to make his passion for small antique collectibles his business. He enjoyed this form of self employment immensely and pursued it every day until his death. He was fond of saying “if you love what you do, you’ll never work a day in your life”. The Burtons moved their family back to Tacoma in 1986. He was proud of his children and loved watching them grow into their unique talents and personalities. Jerry enjoyed his family, photography, music , fishing, skeet shooting, his dogs, his collectibles, and seeing a good movie. He is survived by his wife Jan, his children and their spouses. Diane ( Rudy)Moravec of Sturgis, S.D., Lisa (Phet) Saipraset of Lodi, Ca, Steven E Burton of Bothell, Wa, Joel L (Michelle) Burton of Salem, Oregon and Jay E ( Kristi) Burton of Graham, Wa. His brother William J (Bill) Burton of Weldon, Ca. Eight grand children one great Grand daughter and one great, great grand son. He is preceded in death by his parents, two brothers Ronald L Burton and Robert E Burton both of Orting, Wa. and one grandson of Lodi, Ca. Jerry will be laid to rest at Tahoma National Cemetery in Kent, Wa on March 7, 2022. A life well lived.

Jerry passed away peacefully at the age of 83 on February 2, 2022 at his home in Lakewood Washington. Jerry was born May 6, 1938 to Vernon L Burton and Enid Gladys Nussrallah in Deadwood, S.D. They soon moved to Rapid City, S.D. Where he and... View Obituary & Service Information

The family of Jerry L. Burton created this Life Tributes page to make it easy to share your memories.

Jerry passed away peacefully at the age of 83 on February 2,...

Send flowers to the Burton family.