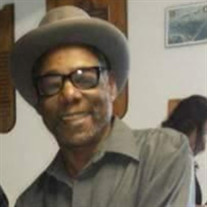 James C. Smith 71, of Tacoma, WA. Passed away on Friday, April 24, 2020 at the home of his youngest brother Norman Ray Smith. The second son and third child of J C Smith and Naomi Chambers was born in Bastrop LA (Strop City) on February 20, 1949 at Morehouse General Hospital. He attended Morehouse High School before transferring to OLCH catholic school where he graduated in 1967. He moved to Washington state in 1967 to live with his mother. James joined the army in 1969 and traveled to Fort Dix, New Jersey for training. From there he went to several other stations including Germany before he separated with an honorable discharge in 1971. He worked for the Pierce County Parks Dept. for 30 years until his retirement in 2001. He enjoyed fishing, yardwork, antique shopping at auctions and time spent with family and friends, especially his grandchildren. Also took pride in fixing up his classic cars and truck. James was an entertaining storyteller and a great source for family history. He leaves behind to mourn his passing his only son, Samuel Flynn (Jody), mother, Naomi Brownfield, step-father, William Brownfield, brothers, Lonell Smith and Norman Ray Smith, sisters, Laura Smith Royster (Jimmy), Brenda Harris (Andrew), Barbara Anne Hodges (Robert), Sheryl Brownfield, grandson, Samuel Flynn Jr, granddaughters, JoAnn Flynn and Jada Flynn. Nieces, nephews, great-nieces, great-nephews, two Uncles, cousins and numerous family and friends who were like family. He will truly be missed by all whom he met, until we meet again.

The family of James C. Smith created this Life Tributes page to make it easy to share your memories.

Send flowers to the Smith family.