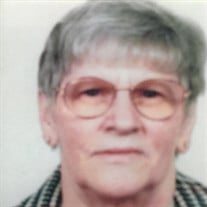 On June 13, 2021, our beloved mother, grandmother, great-grandmother and friend, Irmgard (Irma) Willis, left this earth to live with the Lord. Her family and friends celebrate her life, and thank God for blessing us with her beautiful spirit. Irma was born on June 26, 1929 to Else Hahnemann and Friedrich Weyh in Furth, Germany. Irma lived in Nurnberg where she married Sfc. Watson Willis and gave birth to Hannelore Willis. After travelling the United States with her family, Irma settled in Lakewood, WA. She spent the next 55 years in the Lakewood and Tacoma areas with her daughter, son-in-law, grandchildren, great-grandchildren, and many dear friends. She worked many jobs in her lifetime, but she was proudest of her position as a CNA caring for the Elderly. Irma carried with her a beautiful grace and strength that warmed the hearts of those who knew her. Irma inspired those around her with her a love for the Lord, love for others, and a heart for giving. She contributed to numerous charities, particularly those benefiting military veterans, and always aimed to be a blessing to others. She leaves behind a legacy of unwavering faith, relentless strength, and unconditional love. Irma was preceded in death by many she loved: Watson Willis, Alvin Gray, Franz Moder, Else Modor, Hildegard Niedermeier, Werner Moder, Hans Galsterer, and a host of family and friends. She is survived by her daughter and son-in-law, Hannelore and Roldan Tanhueco; her sister, Elsa Galsterer; three grandchildren and their spouses, Elaina and Kareem Smith, Anthony and Holly Tanhueco, and Alyssa and Patrick Sherry; her 5 great-grandchildren, KJ, Isabella, Mateo, Amelia, and Micah; her nephew, Dieter Schwab and his wife Margit; and so many other friends and family whom she loved dearly. Irma will be greatly missed by her family and friends, who are thankful and privileged to have been part of her life.

On June 13, 2021, our beloved mother, grandmother, great-grandmother and friend, Irmgard (Irma) Willis, left this earth to live with the Lord. Her family and friends celebrate her life, and thank God for blessing us with her beautiful spirit. Irma... View Obituary & Service Information

The family of Irmgard "Irma" Willis created this Life Tributes page to make it easy to share your memories.

Send flowers to the Willis family.