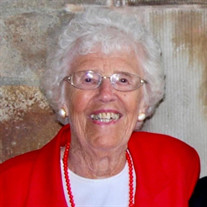 Helen Lucille Nervig Wilson was born on February 3, 1925 in Blue Earth, MN to Clara and Peter Nervig and passed peacefully on December 20, 2021. She spent her youth in La Center, WAbefore heading off to Washington State University, where she graduated in 1948. Helen was selected as one of the “Big Five” outstanding senior women in her graduating class. During her time at WSU, Helen was a proud member of the debate teamand was active in her sorority, Alpha Gamma Delta. Throughout her life, she remained a proud and loyal Cougar. After college, she moved down to Long Beach, CA with a few friends. She worked at Shell Oil Company and spent her free time playing pick-up beach volleyball and driving around in “Orchid,” her 1935 Chevy that “ran on air.” Using the money she saved while working at Shell, Helen embarked on a two month trip to Europe in 1951. She rode the Queen Elizabeth across the Atlantic for her return to the United States. Helen then moved to Olympia, WA where she worked for the Washington State Attorney General. She met Sam, her husband of almost sixty years, during her time in Olympia. After their marriage, they settled in Lakewood, WA. Sam opened his optometry practice and Helen got involved in the community. She supported the Tacoma Orthopedic Association, organized rummage sales to benefit the Mary Bridge Children’s Hospital, participated in the local Parent-Teacher Association, and raisedher two children, Steve and Nancy. Helen loved nothing more than meeting her bridge club for lunch at the Tacoma Country & Golf Club and hosting her annual Bridge Club Picnic out at her beach house on Hood Canal. She was also an avid sports fan, always cheering on her beloved Cougars and keeping up to date on all the Seattle sports teams. She loved golf and walked all eighteen holes well into her late eighties. When her granddaughters were born, Helen never missed a Saturday morning phone call, a dance recital, or a graduation. “Grams,” as they called her, was always their biggest cheerleader and always encouraged them to believe in themselves and pursue their passions. Helen is pre-deceased by her husband, Sam, her parents Peterand Clara Nervig, and her brother, Robert. She is survived by her son Steve Wilson and his wife Dixie, her daughter Nancy Greeley and her husband Paul, and her granddaughters Shelby and Christie Greeley. Her family asks that memorial donations be made in her name to Washington State University’s Crimson Opportunity Scholarship Fund or the Mary Bridge Children’s Hospital in lieu of flowers. She will be sorely missed but we know she will be looking down on her family (and her Cougars) from heaven.

Helen Lucille Nervig Wilson was born on February 3, 1925 in Blue Earth, MN to Clara and Peter Nervig and passed peacefully on December 20, 2021. She spent her youth in La Center, WAbefore heading off to Washington State University, where she... View Obituary & Service Information

The family of Helen Nervig Wilson created this Life Tributes page to make it easy to share your memories.

Helen Lucille Nervig Wilson was born on February 3, 1925 in Blue...

Send flowers to the Wilson family.