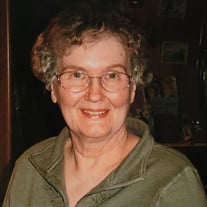 Hazel Nute, 85, died on Tuesday, January 4th 2022 at good Samaritan hospital. She was born on march 8th, 1936 in Badger Minnesota to Herbert and Lillian Larson. She was baptized in the Lutheran Church parsonage at Roseau, Minnesota, on December 11, 1943 Hazel graduated from Roseau High School in Roseau, Minnesota in 1954,and moved to Washington State in October of 1955 where she met her future husband John Norman Nute. They were married in October 1956 and divorced in 1977. Hazel worked for the McChord Air Force Base as a civilian Contract Specialist for 20 years and retired in April 1988. She was an active member of the American Business Women’s Association from 1978 to 1997. She was an excellent cook and entered her original recipes in all kinds of cooking contests and won several prizes. Most notable prizes included her country oat cake which paid $5,000. That prize encouraged her to pursue her love of creating great recipes which lead to an all expenses paid trip to the 38th Pillsbury bake off in 1998 in Orlando, that her sister Barb attended with her. Highlighted by a trip to Disneyworld. A big thrill for Hazel was meeting Alex Trebec who was hosting the event that year. She also enjoyed gardening and had a small outdoor garden she maintained for many years, featuring many of her favorite flowers and vegetables. Hazel is survived by her Brother Ronald larson, sister Barbara roseen children Denice, John and DeAnne, her grandchildren, Aaron, Eric, Jesse joy, Thomas, Kierstin, Angelika, Christian and Brandon and great grandchildren Carter and Jocelyn. She hosted most of the birthday parties for the grandchildren that lived nearby. One of the kid's favorite things about that was the fact that grandma also let them choose the meal she would cook for their own party, including their favorite cake. She loved taking trips to the ocean. Several family vacations were planned for children and grandchildren usually visiting the grayland Westport area. She was a firm believer in healthy eating and exercise. Daily walking along with swimming and dance classes were a regular part of her life. Hazel was loved by her family and friends, and will be missed by all.

Hazel Nute, 85, died on Tuesday, January 4th 2022 at good Samaritan hospital. She was born on march 8th, 1936 in Badger Minnesota to Herbert and Lillian Larson. She was baptized in the Lutheran Church parsonage at Roseau, Minnesota, on December... View Obituary & Service Information

The family of Hazel Elaine Nute created this Life Tributes page to make it easy to share your memories.

Send flowers to the Nute family.