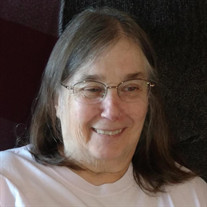 Gloria J. Mack was born December 20, 1947 in Roseau, Minnesota to Donald Foster and Myrtle Grover. Gloria died on December 24, 2021 in Lakewood, Washington. Gloria was 74 years old. Gloria lived in Warroad, Minnesota growing up and attended Warroad High School. Gloria attended the Vocational Technical School in Thief River Falls, Minnesota where she studied Secretarial and related subjects before being hired by the FBI and moved to Washington DC. In March of 1968, she married Darrell C. Mack in Washington DC. They were married 53 years Gloria stayed with Eddie and Sigrid Mack while Darrell was deployed overseas in the Navy. Upon moving to Tacoma, Washington, they raised three children and when they were older, Gloria went to work for the Division of Child Support for the State of Washington, from there she retired in 2012. Gloria enjoyed scrape booking, jigsaw puzzles, reading and much more. Her greatest passion was her family. Her husband, children, grandchildren and new great granddaughter were the most important things to her. Gloria would go out of her to help family, even to the point where she may not have enough for herself. Survivors include: Husband – Darrell; Children – Joseph Mack, Steven Mack, Rebecca Correia; Grandchildren – Tim Mack, Orion Mack, Rayne Correia and great granddaughter – Gabriella Mack. Brothers and Sisters- Donna Muirhead, Vonnie Johnson, Rita Brewster, Joeseph Foster, Nancy Diesen., Michael Foster, Barbara Sheffield, Dolores Falk, Roberta Brunell, Deanne Johnson, Denise Hammer. A special person- Kimarie Pries, Plus many nieces, nephews and cousins. Gloria is predeceased by son Michael Mack, her parents, grandparents.

The family of Gloria Mack created this Life Tributes page to make it easy to share your memories.

Send flowers to the Mack family.