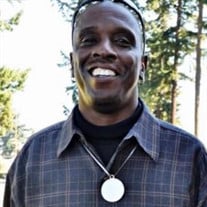 George Anthony Newsome was born November 17, 1962 to Ms. Eliza Newsome in Jackson, MS. At the time of his birth, he had 2 older siblings . After George there was one more. George attended Callaway High School in Jackson, Ms. George decided on a career in the military after graduation, so he then enlisted in the United States Army on October 6, 1981. George served 20 years in the Army retiring as a Staff Sergeant. He specialized in Field Artillery where he received the highest Award, The Honorable Order of St. Barbara. While in the Army, George attended several colleges until he finally obtained his Bachelors Degree. While in the military George met the love of his life Miss Sharon Barrett. They united in matrimony May 23, 1986 and had three beautiful children. After George retired from the military, he completed 13 years of Range Control service for the U.S. Govt. His job was to keep the firing range in great order. Due to health reasons, George had to retire sooner than he wanted. This was a blessing in disguise as it gave him more time to spend with his family and with Masonic friends. George really enjoyed fishing and now he had the time to do so. George became a Master Mason in 1993 while stationed at Baumholder, Germany under the Illinois Jurisdiction. When the Army transferred his family to Washington, George became a charter member of James W. Davis Lodge #100. In 1997 when James W. Davis and Spanaway Lodge merged, George became Worshipful Master later becoming Worshipful Master of the Year. George had many Masonic affiliations such as Past Patron and current Patron of Olympic Chapter #2, OES. He was a Past Commander in Chief of Capital City Consistory #106 (PCIC of the Year) and active in Yemen Temple #52, (Honorary Past Potentate) Willie K. Jennings Court #6, HOJ; Knights of Pythagoras, Martin Luther King Council and the York Rite. Before George passed away, he got his life right with Christ and was attending Shiloh Baptist Church on-line faithfully. George leaves his memories to his cherished wife of 35 years, Mrs. Sharon Newsome, daughter Genesis Newsome and two sons George Newsome Jr and Antonio Newsome. He also leaves his brother Earl Newsome, and nephew Carlous Newsome both of Jackson, MS. Finally he leaves his close friend and brother Larry B . Opher. Daughter Genesis wanted you to know that he was the best dad ever.

George Anthony Newsome was born November 17, 1962 to Ms. Eliza Newsome in Jackson, MS. At the time of his birth, he had 2 older siblings . After George there was one more. George attended Callaway High School in Jackson, Ms. George decided... View Obituary & Service Information

The family of George A Newsome Sr. created this Life Tributes page to make it easy to share your memories.

Send flowers to the Newsome family.