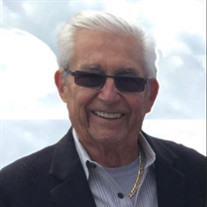 After a full life, lived with much zest, Gary H. Jensen went home to meet his Creator on March 5, 2002. The son of Howard and Evelyn Jensen, Gary was born in Tacoma, Washington on May 5, 1944. He attended Jason Lee and Stadium before entering the workforce as an automotive mechanic. However, it wouldn't take long for him to switch career paths, and he entered the world of paint, working for Sherwin Williams House Paint. Gary would then make a business decision that would have a lasting effect upon the lives of his family, as well as the lives of countless future employees. He went to work at LDI Lacquer Distributors, and it wouldn't be long before he jumped at the opportunity to take over the business himself. For nearly 40 years following, Gary supplied many in the Puget Sound with auto paint and supplies. Working for decades with his son Barry at his side, Gary finally sold the business to pursue some of his other interests. Along with his business partner Ray Schuler, Gary would own and operate the Sun Hill and Williamsberg Apartments. In addition, he had recently been working with his daughter Cherl, as she started her own spa business in Puyallup. His sister Dena would also work with Gary for several years. Dena brought her own set of skills to the business and Gary was able to depend upon her to the fullest. When a problem would arise, the words out of Gary's mouth were usually "Dena will take care of it." And that was that! Despite living in the wet Puget Sound, one of Gary's big loves were convertible cars, of which he would own several throughout the decades. He was also an impeccably dressed man, always making sure he looked sharp, neat and in slacks if he were going to be seen in public. He loved his children, Barry and Cherl, as well as his daughter-in-law Carrie, and grand-daughter Grace Ann. Gary loved his sister, as well as his nieces and nephews, along with their own children. He had a deep love for the holidays, which usually had him breaking out the decorations, cooking some of his favorite dishes and quite often, setting off some fireworks (which he may have loved almost too much). Throughout it all, his loving wife Terri was at his side. For 56 years, the couple were inseparable through the good times and the times when Gary was yet again fighting for his life against cancers and a heart that was giving him problems. Terri said that through these health battles, Gary never complained and felt sorry for himself. He just kept on clicking along and never stopped. Jokingly, Gary would often say that he was held together with Band-Aids. Even when under the weather, he seemed to have a deep well of energy that pushed him along. Gary Jensen was loving, responsible, caring and successful. He will be deeply missed for the man that he was, and he gave more than he took.

After a full life, lived with much zest, Gary H. Jensen went home to meet his Creator on March 5, 2002. The son of Howard and Evelyn Jensen, Gary was born in Tacoma, Washington on May 5, 1944. He attended Jason Lee and Stadium before entering... View Obituary & Service Information

The family of Gary Jensen created this Life Tributes page to make it easy to share your memories.

After a full life, lived with much zest, Gary H. Jensen went...

Send flowers to the Jensen family.