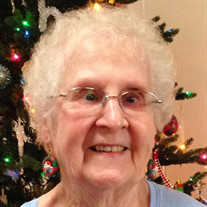 Evon Caroline (Hart) Henricksen was born in Powers Lake, North Dakota, on February 20, 1929. She was the firstborn of Ernest and Carla Hart. She passed away on June 17, 2021, in Kent, Washington at the age of 92. Evon spent the first 13 years of her life in Powers Lake, living “in town” or on the farm with her Grandma and Grandpa Sivertsen. When she was 13, the family moved to Washington where her dad was able to find work, first settling in Spokane for a brief time and then coming to Tacoma. Evon attended Stewart Junior High and graduated from Lincoln High School in 1947. While in school in Tacoma, she was introduced to Lee Henricksen and their romance blossomed. Lee graduated from Lincoln High School in 1944 and then joined the Navy. When he returned from his tour with the Navy, they married on June 27, 1947. Evon became a wife and homemaker and before long, Lee and Evon welcomed 5 children to their family – Karen (deceased), Jon (deceased), Tim, Nancy and Mark. In addition to raising their 5 children, Lee and Evon also raised Evon’s younger brother, David (now deceased), from the age of 5 when their mother was killed in an automobile accident. The family made their home in the Parkland/Midland area. Evon was a member of Bethesda Baptist Church in Tacoma from the age of 13 and over the years was active in their Women’s Auxiliary group as well as serving as a Deaconess and assisting with their Vacation Bible School and other programs through the years. Her faith was very important to her. Evon eventually took a job outside of the home at the 72nd Street K-Mart, working her way up to Manager of the Food Department. She transferred to the Puyallup K-Mart when it opened and retired in 1996 after 19 years with K-Mart. Evon and Lee took the family on vacations most every year, several times to see Evon’s family in North Dakota and California. In their later years, they enjoyed travelling with friends and family to places such as Cancun, Aruba, Jamaica, several trips to Mexico and Hawaii. Just before Evon retired they enjoyed a month-long vacation to Australia with Lee’s aunt and uncle. They enjoyed a few days in Tahiti on the way home from Australia. They also enjoyed visiting family on the east coast and once took a 6-week car tour of the US stopping along the way to visit friends and family. Family was very important to Evon and she is survived by 3 of her children – Tim Henricksen, Nancy Six (Richard) and Mark Henricksen (Madeleine). She is survived by 9 grandchildren – Zack Fairley (Jess), Adrienne Kramer (Shawn), Brendan Riley (Angela), Brianne Riley (Chase Waldrup), Nikki Barone, Madeleine Bishop, Kristen Barone, Katelyn Perry and Taylor Henricksen. She is also survived by 8 great grandchildren – Zoe Fairley, Joshua Nipper, Justin Nipper, Nora Riley, Freya Riley, Theo Waldrup, Ian Whaley and Colin McLendon. Evon is also survived by her brother David’s children, Michael Hart and Jennifer Parks (Charlie) who were like grandchildren to her as well as their children Dante Hart, Ethan Matuzsan and Luke Parks who Evon considered as great-granchildren. We would like to thank the owners and caregivers at Valy’s Adult Family Home in Kent for the loving care mom was given these last few months of her life.

Evon Caroline (Hart) Henricksen was born in Powers Lake, North Dakota, on February 20, 1929. She was the firstborn of Ernest and Carla Hart. She passed away on June 17, 2021, in Kent, Washington at the age of 92. Evon spent the first 13 years... View Obituary & Service Information

The family of Evon Caroline (Hart) Henricksen created this Life Tributes page to make it easy to share your memories.