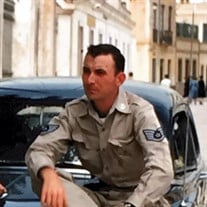 Eugene “Gene” Joseph Schmitz passed away surrounded by family on May 4, 2022. Gene was born December 17, 1932 in Vienna, Missouri to Frank Herman Schmitz and Anna Marie Schmitz (nee Zimmer). He grew up a country-boy, playing around the farms and streams of rural Missouri. He joined the US Air Force at age 17, where he became a Vehicle Maintenance Superintendent. In 1951, he was stationed at Sealand in Wales. On a trip to Liverpool, Gene met Gloria at a showing of Singing in the Rain. Gloria was the love of his life and they were married in Liverpool in 1955. They remained married for 63 years until her passing in 2018 and are now reunited in peace and love. Gene and Gloria were stationed in several states including Florida, Massachusetts, and California (where two daughters were born) and back to the UK several times, (where two more daughters were born.) Gene served overseas in Morocco and Vietnam. Gene was stationed at McChord in Lakewood, WA in 1974 and retired here after 23 years in the USAF. He then joined the Postal Service as a Stationary Engineer, based out of the Pine Street Station until retirement. He was always a hard worker and a well-liked and respected employee and co-worker. Gene’s favorite thing was to spend time with family on local vacations. He loved being at Pacific Beach with a houseful of grandkids, biking the trails in Sun River, Oregon, and taking day trips across the PNW. When the grandkids were little he loved taking them fishing and camping at Lake Chelan. He also loved getting back to Missouri and England as often as he could. His English family loved him enormously and affectionately called him the quiet American. Gene and Gloria also enjoyed several USAF reunions in various states over the years with his original group of airmen. Gene was a talented mechanic and could fix just about anything. He enjoyed working on home projects and cooking big breakfasts on Saturday mornings. Later, he enjoyed crosswords and reading but still planted his own trees well into his 80’s. No one could care for his family more. He cared for his wife during an extended illness and could be counted on to lend a helping hand anytime, anywhere. He is survived by daughters Gail (Jeff), Karen, Kelly, and Paula; grandchildren Cori, Patrick, Emily, Matthew, Michael, Cady, and Collin and their partners ; great-grandchildren Jaxson and Jase; dear family friend Mike; sisters Mary, Lil (Gene) and brother Frank (Sandra) of Missouri and many nieces and nephews. His heartbroken family will miss him more than words can say. Celebration of Life will be held on Sunday, June 12, 2022 at 1:30 at Mountain View.

Eugene &#8220;Gene&#8221; Joseph Schmitz passed away surrounded by family on May 4, 2022. Gene was born December 17, 1932 in Vienna, Missouri to Frank Herman Schmitz and Anna Marie Schmitz (nee Zimmer). He grew up a country-boy, playing around... View Obituary & Service Information

The family of Eugene "Gene" Joseph Schmitz created this Life Tributes page to make it easy to share your memories.

Send flowers to the Schmitz family.